We challenge the culture of racism, repression and retribution that sustains mass incarceration. We seek to remove the structural injustices inflicted on the incarcerated, formerly incarcerated, their families and the communities from which they come. We seek human rights for all members of our society non-violently, in opposition to our current system of justice, which is inherently violent.

Join us as we embark on our campaigns to reform parole,ban the box and end the torturous use of solitary confinement in NY’s prisons, jails and detention centers

Unlock the Block: Release the Vote!

There are 40 million African Americans in America. Organize the vote! 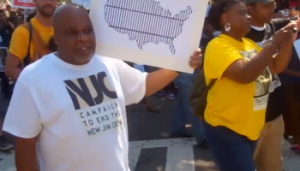 Felon Disenfranchisement has been a voter suppression tool since the passage of the 15th Amendment guaranteeing the right to vote to all citizens regardless of race or previous condition of servitude. The pushback against the 15th Amendment was the passage of facially fair felon disenfranchisement laws that criminalizes and disproportionately impacted former slaves. Former slaves were stripped of their citizenship by these laws and kept from the ballot box.

Along with Felony Disenfranchisement there were literacy test, grandfather clauses, poll taxes and Klan terrorism to keep former slaves from voting. Felon Disenfranchisement is the sole remaining obstacle to the ballot box. The voting rights act of 1965 eliminated all of the above obstacles to voting but felon disenfranchisement, the most egregious form of voter suppression.

There are now 2.5 million prisoners, and another 4+ million on probation or parole who are barred from voting. Of the 50 states only two due not strip their citizens of their right to vote, they are Maine and Vermont (two predominantly white states). African Americans represent 12.5% of the population of America and 50% of all prisoners (2.5 million). 1 out of 3 African American males are under the control of the criminal justice system. The communities of poor people of color are the primary victims of this racist practice.
This practice must be kicked, hollering and screaming into the dust bin of history. Join CENCJ, and let’s get to work!