“We are ex-prisoners along with allies, friends, and family coming together to create resources and opportunities for those who have paid their debt to society.” 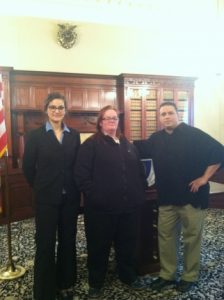 STATE HOUSE, BOSTON, APRIL 2, 2015….Edwin Melendez, 44, spent decades living what he describes as a chaotic lifestyle that eventually landed him in jail on a drug conviction.

After five years of sobriety, his past mistakes hinder his ability to move forward, he said, because of a state law that suspends the driver’s license of anyone convicted of a drug crime for up to five years and levies a $500 reinstatement fee.

Melendez, who never had a Massachusetts license before he went to jail, said now it is impossible for him to get one because he cannot save $500 to pay the fee, and without a license he lost a good-paying job that was starting to make a difference for him and his family. He is supporting his wife, newborn baby and two older children. Without work, he relies on public assistance.

Two lawmakers are trying to repeal the $500 reinstatement fee and purge driving records of past suspensions, arguing that existing laws prevent people from rebuilding their lives and becoming productive in society again.

“I had a rough life, you could say. I paid my dues,” Melendez said.

After he was released from jail, Melendez went to work as a machinist at Ken’s Foods Inc. in Marlborough, the salad dressing maker. He paid a co-worker weekly to drive him to work from his home in Worcester. When the co-worker left the job, Melendez had to quit his job because he had no way to get there.

“It’s holding me back,” Melendez said about his inability to get a driver’s license. “I am just trying to be another productive member of society. I have lost opportunities because of this. It has been a hit. I could be doing so much better than what I really am.”

Melendez said he when he was arrested on the drug charge he was riding a bicycle.

Senate Majority Leader Harriette Chandler, a Democrat from Worcester, said sanctions at the Registry of Motor Vehicles against those convicted of drug offenses do not make any sense if the crime did not involve a car.

Asking someone who has just gotten out of jail or drug treatment to pay $500 is an “insurmountable barrier” for them, said Rep. Elizabeth Malia (D-Jamaica Plain), who filed the legislation in the House.

The law also creates a “backdoor CORI” check, according to Chandler and Malia, referring to the state’s Criminal Offender Record Information. A person’s chances of employment are harmed for years because their drug conviction is listed on their driving record, the lawmakers said.

Driving under the influence of any substance would still carry the same punishment, and the legislation (H 3039/SD 1665) would not prevent a judge or the RMV from suspending a person’s license for a drug offense if it is determined to be an appropriate punishment, according to Chandler.

Malia, who co-chairs the Joint Committee on Mental Health and Substance Abuse, said the RMV sanctions have had unforeseen consequences.

“We have established new barriers for people who desperately need to get back to work,” she said.

“Now that we are trying to do more about diverting people from jail, and giving people a chance to recover, having this barrier for them to get over sometimes really knocks people down,” Malia said. “If you can get a job and you can’t get to work, basically the door is just slammed on you.”

Chandler said the “collateral punishment” bears no correlation to the original offense, and said a rehabilitated person should be able to travel to work or job interviews.

On average, approximately 7,000 people in Massachusetts each year lose their driving privileges under the current law, with the majority of the crimes not involving a vehicle, according to Chandler. Lawmakers estimate that about 2,500 of those people are able to pay the $500 each year and get their licenses back.

The state collects approximately $1 million annually from the fee, according to Chandler’s office.

While similar legislation never made it out of committee last session, both Malia and Chandler said they think the proposal has a better chance this session because policymakers are focused on finding ways to help people who suffered from drug addiction get their lives back. Malia’s bill is before the Transportation Committee, but has not been scheduled for a hearing, while Chandler’s bill still awaits a bill number and a committee assignment.

Serving the working press since 1910
http://www.statehousenews.com