As a former Republican member of the Oklahoma Legislature, I, along with several colleagues, introduced legislation to decriminalize the simple possession of marijuana. An editorial in the Tulsa World called it: “an idea whose time has come.” This was in the mid- to late 1970s. The bill never reached the House floor because it lacked sufficient votes to pass. 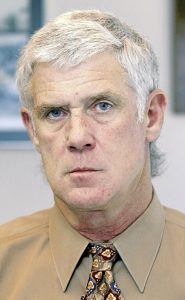 ~~
As a longtime practicing attorney engaged in criminal defense, I have handled hundreds of marijuana-related cases in city, state and federal courts throughout Oklahoma, and nationally.

I have witnessed the damaging effects to individual liberty and a multitude of barriers to legitimate employment from its classification as a Schedule I controlled substance.

Aside from generating huge amounts of dollars for use by law enforcement agencies in fighting a “war” that cannot be won, supporters of continued criminalization of marijuana ultimately will see it fail.

As a former Republican member of the Oklahoma Legislature, I, along with several colleagues, introduced legislation to decriminalize the simple possession of marijuana. An editorial in the Tulsa World called it: “an idea whose time has come.” This was in the mid- to late 1970s. The bill never reached the House floor because it lacked sufficient votes to pass.

Fast forward to today: A significant push at the state level has resulted in not only the passage of medical marijuana legislation as well as the beginning of decriminalization of marijuana in a growing number of states.

Legalization of marijuana for legitimate medicinal use should be a no-brainer as a practical, medical and humanitarian goal. I am certain the lack of understanding and necessary commitment here in Oklahoma will make our state one of the few holdouts left in this country before it succeeds.

Never in modern history has there existed greater public support for ending the prohibition on marijuana and replacing it with regulation. The historic votes on election day 2012 in Colorado and Washington — where, for the first time ever, a majority of voters decided at the ballot box to abolish cannabis prohibition — underscore this political reality.

Oklahoma has some some of the strictest marijuana penalties in the nation. A second offense for minor marijuana possession is classified as a felony, punishable by up to 10 years in prison. Cultivation of any amount of cannabis also is classified as a felony and may be punishable by up to life in prison. These penalties are clearly disproportionate to the behavior in question.

This ongoing prohibition financially burdens taxpayers, encroaches upon civil liberties, engenders disrespect for the law, impedes legitimate scientific research into the plant’s medicinal properties, and disproportionately impacts communities of color. Presently, African Americans in Oklahoma account for 7.6 percent of the state’s population. They also consume marijuana at similar rates to whites. Yet, African Americans constitute 20.8 percent of all marijuana possession arrests in Oklahoma.

It is time to stop ceding control of the marijuana market to untaxed criminal enterprises, and it is time for lawmakers to pass laws permitting medical and personal use of cannabis by adults and licensing its production.

A pragmatic regulatory framework that allows for limited, licensed production and sale of cannabis to adults — but restricts use among young people — best reduces the risks associated with its use or abuse, as well as satisfying federal concerns about states’ taxation and regulation of cannabis.

It is time for a new approach in regards to Oklahoma’s ineffective and expensive cannabis policies. The ongoing criminalization of the cannabis plant and the practice of arresting and prosecuting those adults who consume it responsibly is a disproportionate public policy response to what is, at worst, a public health concern.

James Garner, recently deceased, was praised in a Tulsa World editorial as a true Oklahoma-born success story. In his memoirs, published in 2011, Garner addressed his reasons for supporting the legal use of marijuana. He is quoted as saying: “I don’t know where I would be without it. … It opened my mind to a lot of things, and now its active ingredient, THC, relaxes me and eases my arthritis pain.… I smoked it for about 50 years. … I drank to get drunk but ultimately didn’t like the effect….not so with grass. Grass is smooth. It had the opposite effect from alcohol. …. It made me tolerant and forgiving. … After decades of personal research and observation, I’ve concluded that marijuana should be legal and alcohol should be illegal.”

Personally, I doubt I could have said it any better.

Paul Brunton is a Tulsa-based criminal defense lawyer and a former three-term state legislator. He served as Tulsa County chief public defender from 1972-74, and as chief federal public defender for the Northern and Eastern districts from 2001-2006,