The three inmates will wait at least until April unless Oklahoma decides to change the protocol. Oklahoma will not carry out any executions using midazolam until the U.S. Supreme Court reviews a legal challenge to use of the controversial lethal injection drug.On Wednesday, the Supreme Court granted a stay of three upcoming Oklahoma executions, ordering “that petitioners’ executions using midazolam are stayed pending final disposition of this case.” 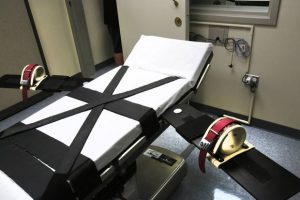 Oklahoma will not carry out any executions using midazolam until the U.S. Supreme Court reviews a legal challenge to use of the controversial lethal injection drug.

The stay was requested by both Oklahoma Attorney General Scott Pruitt and attorneys for the death row-inmates who filed a lawsuit in 2014 challenging the state’s lethal injection protocol. The attorney general’s application filed Monday sought to postpone the executions until a resolution of the court case, or until the Oklahoma Department of Corrections can obtain a viable alternative execution drug. State officials did not immediately say whether they planned to obtain alternative execution drugs that are permitted, such as pentobarbital.

Richard Glossip was scheduled to be executed Thursday using the same drug combination as two previous Oklahoma executions: the sedative midazolam, a paralytic and potassium chloride.

He and the other inmates allege that Oklahoma’s current lethal injection protocol amounts to cruel and unusual punishment, arguing that the sedative midazolam is not a true anesthetic and may not render inmates unconscious before the final two drugs are given, both known to cause pain.

“Midazolam is an inappropriate drug to use in executions. The scientific evidence tells us that even the proper administration of midazolam can result in an inhumane execution,” Dale Baich, a federal public defender representing the inmates, said in an emailed statement. “We look forward to exploring these questions with the Court.”

The justices agreed this past week to review Oklahoma’s use of midazolam. The drug has been used in problematic executions in Arizona and Ohio, in addition to last April’s execution of Clayton Lockett at the Oklahoma State Penitentiary.

Glossip is among 21 death-row inmates who filed the lawsuit challenging that drug combination last summer, after Lockett’s execution, which the 10th Circuit Court of Appeals called “a procedural disaster.”

During his execution, Lockett rose up off the gurney and began speaking after he had been mistakenly declared unconscious. A state investigation cited a failed IV as the key failure in Lockett’s 43-minute death, not the drug combination.

Inmate Charles Warner was among those original plaintiffs, but was executed Jan. 15 after he failed in his bid for a stay by a 5-4 vote.

Witnesses at Warner’s execution reported no obvious signs of distress, and his death took 18 minutes. But attorneys for the inmates have argued the paralytic drug would mask any problems caused by midazolam, which they contend may not cause reliable unconsciousness and isn’t a true anesthetic.

Though Warner was executed, the underlying legal challenge to Oklahoma’s protocol remained before the Supreme Court. Because it takes only four votes to grant certiorari — or judicial review — the court decided Friday to move forward with a legal review of the case.

The court scheduled oral arguments in the case for April 29, one year after Lockett’s execution. Attorneys for the state and the inmates will present arguments before the court in April and the justices will decide by late June.

Pruitt has previously stated that Oklahoma’s execution protocol has been affirmed as constitutional by two federal courts.

His spokesman, Will Gattenby, said Wednesday evening that “the Attorney General’s Office will continue to support the Department of Corrections and their ability to ensure that justice is carried out for the victims of these heinous crimes, whose families have waited a combined 48 years for the sentences to be carried out.”