PEACE & POLICE is a nonviolent campaign for social change, aimed at restoring trust and respect between our communities and our police. This campaign is the work of students at Virginia Union University who are majoring in Criminology and Criminal Justice. Many of us will eventually have careers in the field of law enforcement and policing and we want the relationship between the police and our communities to be strong. This Peace & Police campaign is where we offer our thoughts and ideas about how to make this relationship the best it can be.
JOIN THE CAMPAIGN

Community policing is a new philosophy of policing based on the concept that the police and citizens can work together in creative ways can solve contemporary community problems. Restorative justice provides an entirely different way of thinking about crime and victimization that can be used in community policing. 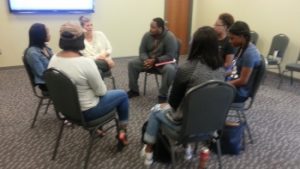 Restorative justice seeks to enable offenders to make amends to their victims and community, and then return to the community as a productive and repaired fully participating citizens. Restorative justice provides an entirely different way of thinking about crime and victimization. Rather than the state being viewed as the primary victim in criminal acts and placing victims and offenders in passive roles, restorative justice recognizes crime as being directed against individual people. (Encyclopedia.com)

Restorative justice assumes that those most affected by crime should have the opportunity to become actively involved in resolving the conflict. While denouncing criminal behavior, restorative justice emphasizes the need to treat offenders with respect and to reintegrate them into the larger community in ways that can lead to lawful behaviors.

Community policing is a new philosophy of policing based on the concept that the police and citizens working together in creative ways can solve contemporary community problems related to crime, fear of crime, social and physical disorder and general neighborhood conditions. The philosophy is predicated on the belief that achieving these goals requires the police to develop a new relationship with citizens, allowing them the power to set local police priorities and involving them in efforts to improve the overall quality of life in their community.

Restorative Justice and Community Policing sometimes work together. In some states people are actually trying restorative circles as a part of community police. The goal is to decrease the rate of incarceration and give victims and offenders a chance to work out their differences, without a judge. In Virginia, the goal is to implement restorative justice outside our system to help deal with minor situations.

An example of this tactic working is when a school security officer from a local high school visited our class and shard an event that occurred between her and a young lady. The officer was simple doing her job when restraining a young lady during a fight was her only option. But the young lady claimed that the officer had used excessive force on her. There was a circle with the young lady, her parent and the officer to address this conflict.

Eventually this issue was resolved when the officer explained that the young lady was fighting back and she had to restrain her to keep her from fighting the other student and getting hurt. When the parent understood what had actually happened, she was no longer looking to file charges against the officer. Everyone left the circle feeling they were understood and heard. No one left the room feeling uneasy.