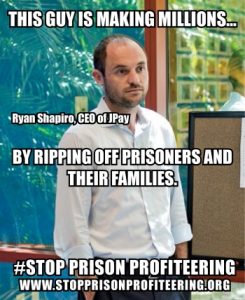 Securus Technologies announced on April 14, 2015 that it has signed a definitive Stock Purchase Agreement to acquire JPay Inc.

JPay, a Miramar-based technology company that provides prisons with electronic payment services, email and a host of educational and entertainment apps, is being acquired by Securus Technologies of Dallas. Terms of the deal were not disclosed.

JPay, with 255 employees, operates in 33 state prisons serving more than 1.6 million inmates. JPay was founded in 2002 as a payments company and later evolved to include a digital platform that combines tablets, kiosks and an inmate cloud, giving inmates access to email, music, books, games, shopping and education.

“We are always eager to expand our footprint,” said Ryan Shapiro, JPay’s CEO. “With Securus behind us, we can now make that happen in a fraction of the time. … I credit our team for their relentless pursuit of the company’s vision, which is to develop products that make prisons safer, more efficient, and most importantly that enable inmates to transition into viable citizens once released.”

Shapiro said the entire team is staying put in South Florida, and Shapiro will continue to run JPay, but as a wholly-owned subsidiary of Securus. “We are interested in being more active with the tech community here in South Florida,” said Shapiro. “Most of our team is software and firmware developers.”

The transaction is subject to regulatory approval and is expected to close in the second or third quarter of this year, the companies said. Securus Technologies serves more than 2,600 public safety, law enforcement and corrections agencies, and more than 1 million inmates across North America, with a host of services. “This transaction thrusts Securus into the fastest-growing segments in corrections: payments, email, and most recently, inmate tablets,” said Rick Smith, CEO of Securus Technologies.