Last July Criminal Justice Reform Advocates asked the question, Is Prison Overcrowding… Real or Manufactured? A year later we are seeing the answer. 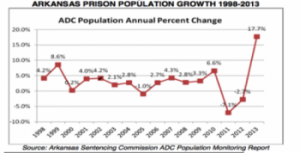 In the wake of Act 570 (2011), Arkansas saw reductions in both crime and incarceration.¬Ý However the Arkansas General Assembly and Board of Corrections has since implemented policies that have made Arkansas the national leader in increase of incarceration. ¬Ý Arkansas has set record highs in prison population in back-to-back months (April 2015 and May 2015).¬Ý The prison population is closing in on 19,000 compared to 14,805 in 2012.

A JFA Inst. report commissioned by the Arkansas Department of Corrections, Arkansas Community Corrections and the Sentencing Commission explained:

With a declining crime rate and only moderate growth in the resident population, the recent large increase in Arkansas‚Äô incarcerated population is likely driven by policy choices within the state‚Äôs criminal justice system. See the answer, Seeds of Liberation Omavi Shukur – Director Seeds of Liberation