We call on Illinois lawmakers to take a realistic view of what community safety means and how to achieve it. Our current systems have been failing individuals, families, and communities for generations. The needs of survivors are not being met and the current system disrespects and harms accused and convicted people, making them and their families unsafe. We can no longer condone the harms of our current laws and allow them to continue to separate families and perpetuate harm for generations. Let's act!

From commitment to action!Â Please support bills that offer a truly progressive step forward in ending our reliance on carceral policies and toward proven policies for community safety for all. 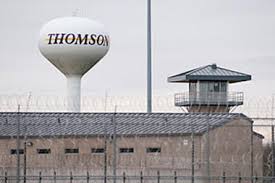 Check out this post by Raphael Sperry, president of Architects/Designers/Planners for Social Responsibility, on the violence inherent in the design of Thomson Correctional Center

Thomsonâ€™s planned conversion into a Federal supermaximum security prison raises the prospect of extended solitary confinement for hundreds of men, as at the infamousÂ ADX Florence. There, the response to the putatively most violent prisonersâ€”but more often the most despised, for whatever reasonâ€”takes the form of sensory deprivation and social isolation. The outcome is frequent mental breakdowns, psychosis, and suicide. The ability to withstand isolation varies among individuals, but the effects are ultimately just as violent as other internationally condemned human rights violations (which is why I am leading aÂ campaignÂ to prohibit the design of spaces intended for prolonged solitary confinement).Â

Thomson, much likeÂ Tamms, dehumanizes inmatesÂ by its very design.