Near 10,000 people held in this private prisons complex requires treating between 750,000 to one million gallons of water every day in drought-stricken Pinal County. 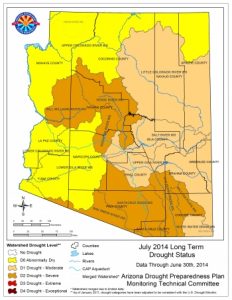 There are near 10,000 people held in these prisons, which requires the system to treat between 750,000 to one million gallons of water every day in drought-stricken Pinal County. Pinal is one of the most severley impacted drought areas in the state, which is among the hardest hit in the entire country.

Before water can be used, it has to be drawn from a large underground aquifer via the facility’s 800-foot well. As raw water, it flows into the treatment system to be analyzed and treated. From there it is further purified chlorinated to ensure its safety. Then, it is sent to one of four facility holding tanks. From there, the water travels through booster pumps that push the water to the facility where the tap is turned on and the water is available for use.

Once that water is used, it takes another journey to a wastewater treatment plant, where it goes through a grinder and then to the plant where it is taken through an extensive biological cleansing process. Once cleansed, it is “recharged” back into the ground where it will eventually seep back into one of the aquifers and the process starts all over again. At each stop along the way, technicians are there to ensure the equipment is running properly and that each standard is met or exceeded.

Why would we trust this scandal and abuse ridden for-profit prison corporation to suck millions of gallons from a depleted aquifer dat after day, dump it back in to the aquifer as sewage… And then give it to 10,000 prisoners to drink again?

Not to mention, a prisoner uses twice as much water per day as the average person. The only green prison is an empty one.