A new jail in Pensacola is being considered for 26 acres which was home to the Escambia Wood Treating Company (ETC) who was found to have contaminated an underground aquifer and hundreds of thousands of tons of soil. 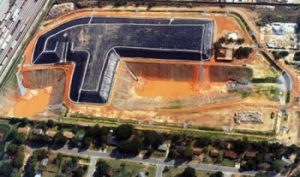 [Update: After hearing from the public, Escambia County Commissioners voted 4-1 against building a new jail on former Superfund site. Thanks to all who chimed in on this issue. Note, the decision the commission made still has serious problems.]

The controversy of a proposal for a new jail in Escambia County has come to the attention of HRDC’s Prison Ecology Project, as the county will be taking a vote at 5pm November 5th about this issue.

The Prison Ecology Project (PEP) was founded earlier this year as a national effort to address the growing concern around environmental health hazards related to the construction and operation of prison, jails and other detention facilities. While we are still scratching the surface in research on this subject, it is clear that the reality of toxic prisons is a serious matter to contend with.

Recent decades of tough-on-crime political rhetoric has created a social climate where prisoners are viewed as being undesirable, even expendable, elements of our society. As a result the facilities they are forced to live in are often built on severely polluted land such as old mine sites, landfills, military bases and other industrial areas which end up being declared Superfund sites.

(The image above is of the Superfund site in Pensacola, nickmaned Mt. Dioxin by local residents. To the right is Keyontay Humphries, regional organizer of the ACLU in NW Florida speaking out against all three proposed locations to rebuild the new jail.)

In the case of this proposal for a new jail in Pensacola, the land being considered includes 26 acres northeast of the intersection of Palafox Street and Fairfield Drive which was home to the Escambia Wood Treating Company (ETC) and was found to have contaminated an underground aquifer and hundreds of thousands of tons of soil.

The location was designated as a Superfund site by the Environmental Protection Agency (EPA) resulting in 358 families being moved out of the area because cleaning the site with citizens nearby risked exposing them to toxic dust. This became the third largest permanent Superfund relocation in the nation’s history.

While a clean-up did finally occur, the issues surrounding the site are not resolved.

If the County Commission approves this site for a jail, the tainted property, now called the Mid-Town Commerce site, could once-again become a home to thousands of Escambia County residents.

As Wilma Subra, a chemist and president of the Subra Company who advised Citizens Against Toxic Exposure (CATE) during the mass relocation from the contaminated ETC site, pointed out in thePensacola News Journal last month:

It’s changing the land use the remedy was designed for … when they did the cleanup, they did it for industrial use based on an eight-hour standard … people should not be allowed to live there 24 hours.

According to federal laws intended to uphold the basic rights of a healthy environment, prisoners are entitled to all the same protections as non-prisoners. And in the case of a county facility such as the one being proposed, many of its residents have not been found guilty of a crime, but are presumed to be innocent and awaiting their right to a fair trial.

More specifically, to subject individuals caught up in the criminal justice system to heightened risks of adverse health impacts may present an environmental justice problem for this facility, being that incarceration has been found to consistently impact low-income communities and people of color disproportionately in every state of the country.

For example, if any federal agencies would be involved in the permitting, funding, construction or operation of the facility, it will need to comply with Title VI of the Civil Rights Act and Executive Order 12898 (“Federal Actions to Address Environmental Justice in Minority Populations and Low-Income Populations”).

Unfortunately Escambia County is not new to adverse impacts on prisoners in its facilities. Only one year ago the local jail was impacted by an extreme flooding incident reminiscent of the environmental human rights atrocities which followed Hurricane Katrina’s impact on New Orleans in 2005, where prisoners were locked in cages at gun point while flood waters literally rose around them, with no real evacuation plan in place. In the Escambia County jail, flooding triggered a chain of events that lead to amassive explosion which killed two prisoners and injured well over 100 other prisoners and staff members.

Interviews following the flood and explosion indicated that the odor of gas was extreme and continued for many hours after reports of headaches and vomiting from the fumes, by both prisoners and prison staff.

This incident occurred amidst a five-year federal investigation of that facility which determined that inadequate management of the jail had led to routine violations of inmates’ constitutional rights including “appalling” levels of violence, “clearly inadequate” mental health care and a practice of segregating inmates according to race (which was reported to have ended, but only one year earlier.)

As the DLR Group, a consulting firm for the new jail project, pointed out in the same Pensacola News Journal article referenced above, “abandoned landfill and industrial facilities — so-called Brownfield sites — [have] been used to build jails and even juvenile detention centers in other states.” That is indeed accurate, and also morally repugnant.

While the DLR Group’s statement was aimed at normalizing the practice of locking people up on toxic waste sites, the Prison Ecology Project urges you to examine the other side of this issue. The same communities that have experienced the brunt of pollution from contaminated industrial sites—a phenomenon often known as environmental racism—can anticipate that their friends and family members may now end up back on those same contaminated sites as victims of a broken criminal justice system that places no value on their health and lives.

As a former 30-year resident of a neighborhood relocated by the ETC superfund site, Lisa Wiggins, pointed out:

Why would you spend millions of dollars to get people out of the area, then spend millions to put people back out there? A lot of people have passed on from cancer and other different ailments … you take the chance of 20 years down the line having to pay all these prisoners. Envision you had a child that was arrested and put in jail, and you were one of the people who were relocated. How would you feel?

Along with the possibility of facing lawsuits from prisoners regarding civil rights and health impacts, the county should also take into consideration costs associated with potential worker’s compensation for employees who may be impacted by the residual toxicity of expose to this site.

Instead of investing the time of public officials and taxpayers money in justifying the use of this site for a new local prison, in violation of the land use designed by the EPA clean-up, we encourage you to focus resources on alternatives to incarceration and community-based tools to reduce the number of people that Escambia County places behind bars.

Please consider writing a note to the commissioners: