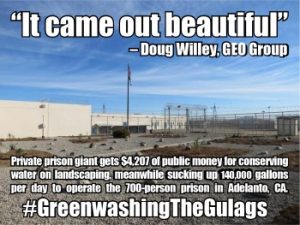 In March 2015, GEO Group garnered attention from the Human Rights Defense Center (HRDC) #GreenwashingTheGulags campaign for announcing that they had taken advantage of apublically-funded grant program to promote water conservation by installing a native landscape plan at the Desert View Modified Community Correctional which they run indrought-stricken Adelanto, California. Of course, the labor for the project was completed by prisoners, and now, where there was once just some dirt, there are well-arranged rocks. The landscape even includes rocks that were painted blue to spell out “GEO.”

Despite the new rocks, GEO still draws over 140,000 gallons every day to operate that 700-person facility alone. Never mind the nearby 1,300-bed Adelanto Detention Facility they also operate to house immigrant prisoners.

You can do the water math yourself, it’s not too complicated. The average prisoner requires about 200 gallons of water per day (well, a recent Environmental Impact Statement for a proposed federal prison actually put it at 214 gallons, but I’m trying to keep the calculations simple here.)

That’s more than double the average that someone uses outside of a prison, according to the scientists of the U.S. Geological Survey who says that a person uses about 80-100 gallons of water per day in their home.

Oh, about that Adelanto Detention Facility, GEO expects to complete 640-bed expansion and begin intake by July 2015. That’s a total capacity of 1,940 immigrant prisoners awaiting deportation, being forced to use an extra 194,000 gallons per day more than they would if they were at home with their families. (If they are lucky enough to make it out alive.)

You’ll be shocked to learn that GEO Group, the second largest private prison provider in the world, didn’t list these statistics among their website’s “Green Initiatives” and “Sustainability Tips.” (And they definitely didn’t put this issue on the agenda for their shareholders meeting in May.)

According to the “Going Green” portion of their site, “[f]or several years, The GEO Group has been tracking and analyzing its facilities’ utility efficiencies on a monthly basis.” But you’ll probably never be able to find out the results of that, because for the past 10 years GEO has also been fighting to beexempt from public records laws that require other government agencies to disclose what they are doing.

But the most repulsive portion of GEO’s greenwashing is in their incessant bragging about LEED certifications.

Never mind that private prisons are consistently under-staffed (New Mexico found for-profit facilitiesunderstaffed by 10% or more) by consistently under-paid employees (a report from Texas showed “private prison guards were paid 28% to 37% less than state prison guards”); or that these facilities don’t have to tell you what actually goes on behind their walls; or that they are bastions of corruption. Just take their word for it when GEO says they deserve these LEED certifications.

In March 2011, Prison Legal News released an extensive reported on the scandal that led to the construction of BRCI, which was opened at a time when there was excess bed space in Florida’s prison system and it was not needed… Wait, that doesn’t sound very environmental.

The deal sparked a federal investigation into the potentially illicit conduct in connection with the legislative process involving BRCI, centering around former Florida House of Representatives Speaker Ray Sansom, who resigned in February 2010 amid a state criminal and ethics investigation.

The main thrust of that state investigation involved allegations that Sansom had falsified the 2007-08 state budget to insert $6 million in appropriations for the construction of an aircraft hanger for Jay Odom, a prominent contributor to the Florida Republican Party.

GEO Group, incidentally also a major contributor to Florida Republicans, gave $85,000 to the Republican Party of Florida from 2006 through 2009, plus tens of thousands of dollars in donations to state Republican Party PACs and individual Republican candidates.

But certainly not all of GEO’s LEED certified prisons could be scandal-ridden, right?!

Well, let’s take a peek at a few examples:

Apparently the quality of the overall environment doesn’t include civil liberties. Come to think of it, the immigrant mothers detained at Karnes Detention Center near San Antonio who told reporters that they faced retaliation after declaring a hunger strike in April to protest the conditions in which their children are being held didn’t mention the LEED certifications either.

GEO even indicated that this specific facility was going to be more humane than other immigrant detention facilities. Sarwat Husain, president of the San Antonio chapter of the Council on American-Islamic Relations, wasn’t convinced: “If it walks like a duck, quacks like a duck and smells like a duck, it’s a duck,” she said. “It’s just a glorified prison.” She made no mention of gratitude for the LEED features that undocumented friends or family members may one day wind up forced to witness.

According to Lisa Graybill, legal director of the ACLU in Texas, “It really begs the question of why they spent so much money constructing a facility like this when we know that there are alternatives, and less expensive ones?”

And I would add to that, more environmentally-friendly ones.

A Note about LEED

The LEED certification process of the U.S. Green Building Council has been coming under heat for several years in what some environmental groups have called LEEDwashing, a play on the term greenwashing, indicating the short-sighted and narrow tendencies of developers painting themselves as environmentally-friendly to gain public relations points and negotiate permit approvals for controversial projects.