Recent conditions at Parnall have been literally poisoning people through prolonged exposure to emissions from human feces. 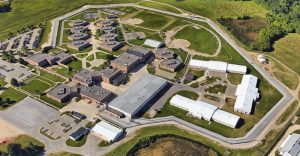 Parnall Correctional Facility in Jackson County, Michigan, doesn’t have an official gas chamber. In fact, it’s considered a low-security prison. But recent conditions at Parnall have been literally poisoning people through prolonged exposure to emissions from human feces.

Last year, Kevin Blair Sr. watched his son, also Kevin Blair, a 40-year-old Michigan prisoner, deteriorate from a mysterious illness over a period of months before a test finally showed what was wrong: he had unsafe levels of methane flowing through his blood.

On January 20, Blair Jr. filed a grievance complaining about long-standing air-quality problems and “toxic gases emitted from behind [his] cell” in Parnall’s 9 Block.

Another prisoner, Christopher Harvey, had also filed a grievance one week earlier, after being woken up by an officer telling him that his help was needed to clean sewage out of the basement at Michigan DOC’s Parnell prison.

“He stated that I would get paid,” Harvey explained. “I said no. My reason is that I’m not qualified to clean up such vast messes of human excrement. Hazmat or Servpro needs to be called. We are living in unsafe conditions. Soon we will get sick. There is human feces in the air, and the basement is flooded with sewage.”

Blair and Harvey weren’t the only ones to complain. The problem had been occurring for months with reported complaints of human waste and maggots rising through drains in the shower rooms. A report from the Detroit Free Press indicated that the sewage back up coincided roughly with an outbreak of norovirus, resulting in a partial quarantine being imposed after dozens of prisoners came down with flu-like symptoms.

Parnall Correctional Facility buildings were first opened in 1926 as part of the Michigan State Prison That prison had been described as the largest walled prison in the world until the ’80s, when it was rocked by massive riots. In 1988 the prison was divided into smaller institutions, such as Parnall, but the complex still maintains 47 buildings, including 5 housing units.

On February 5, the Free Press reported that Michigan Occupational Safety and Health Administration (MIOSHA), was investigating an employee’s complaints about the poor air quality and raw sewage. As of March, the investigation was ongoing, but Free Press reporters were able to obtain records through a FOIA request indicating that MDOC was not fully cooperating.

Although the investigation was spurred on from a monthly report submitted by prison counselor James Carr affirming the sewage concern, FOIA records surfaced evidence of at least one employee’s refusal to participate in the investigation. Another prison counselor, Tara Gerou, told an investigator with the State Legislature’s Corrections Ombudsman via email, “I am fearful the MDOC … will retaliate against me if I cooperate with you and your investigation.”

Prior to Carr’s report, there had been months of complaints from prisoners themselves, who were forced to endure living in the repulsive conditions.

“I have several health problems due to this sewage spill,” Blair wrote in his January grievance. “Over the past couple of months, I’ve lost 30 pounds, headaches, lethargy, my eyes burn every time in my cell.” He said his parents “were horrified when they visited and seen me.”

Another prisoner, Michael Threet, 38, who was released from the prison in early February, also stated that he and others in 9 Block experienced the same severe health effects as Blair. Threet said some of the sewage was dumped in the prison yard, where inmates walked through it, tracking it throughout the prison, including the chow hall.

Chris Gautz, the Corrections Department spokesperson denied Threet’s allegation, which is not surprising, as he also initially told the Free Press reporter that the whole sewage incident at 9 Block was false.

The Free Press FOIA was also able to show that it wasn’t just the prisoners whose complaints were disregarded. Allegations of long-term sewage issues turned out to be consistent with complaints made to MIOSHA by an MDOC employee as far back as August 2016. Noe Alvarado, a special activities director at Parnall, sent an email attempting to bring the issue to light, stating that “maggots come through drains and cracks that are not sealed,” and “The whole facility needs to be inspected by a professional licensed outside party to ensure the problems are identified so they can be permanently fixed.”

That initial investigation was closed quickly and quietly, with the prison officials burying the concern and claiming the problem was resolved.

Thanks to diligent reporting by the Free Press and grievances from persistent prisoners, the sewage problem might actually get cleaned up, and Blair has since retained an attorney, so there may even be some semblance of justice for the negligence that resulted his documented methane poisoning.

But the deeper problem of over-incarceration remains. While this has been a national trend for decades, Michigan’s prison population statistics have been uniquely troubling, in part because Michigan prisoners stay locked up for longer.

According to MDOC, there are about 1,900 prisoners who have served their minimum sentence but were denied release by the parole board even though they qualify as a low risk to reoffend.

With over 43,000 prisoners in the state, 1,600 of which are crowded in at Parnall alone, how long until the next massive sewage mishap arises?