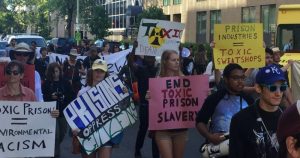 Over the past week, the Prison Ecology Project, the Campaign to Fight Toxic Prisons and our allies have been reviewing the Department of Justice (DOJ) proposed 2018 budget and listening in on budget hearings in D.C.

After three steady years of our nationwide grassroots organizing, including a march to the doorsteps of the DOJ last year, the agency is now stating that it does not want or need to build the new federal prison in Letcher County. While this may not be the end of our fight yet, it is a major turning point.

Unfortunately, it seems members of Congress with vested interest in the $444 million construction project—led by U.S. Rep Hal Rogers—will continue pushing for it regardless. Now is a good time to shed light on this story, before shady dealings are able to dictate the next chapter.

While statements in the budget do not explain the massive, unprecedented outpouring of opposition this prison has seen, a review of the NEPA Environmental Impact Statement record to date illustrates a growing successful alliance between environmental groups, criminal justice activists and local residents.

The DOJ budget language below can also be found in this link.

From page 7,  “The BOP does not request New Construction funding for FY 2018. Further, the FY 2018 budget proposes a $444 million rescission in unobligated New Construction balances, originally appropriated in FY 2016 for the construction of a new facility in Letcher County, KY”

From page 28, “Item Name: Rescission of USP Letcher County, KY Unobligated Balances; Description of Item: The budget proposes to rescind $444,000,000 in unobligated New Construction balances originally appropriated in FY 2016 for the construction of a facility in Letcher County, KY. This proposal will result in stoppage of any major site work, preliminary project work and/or planned contract activities for this construction project.”