Updates from the Fight Against Toxic Prisons 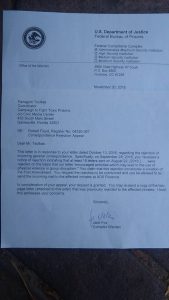 First, a huge thanks to the people who came out to the Civic Media Center earlier this month to help send a mass mailing from the Campaign to Fight Toxic Prisons out to over 500 prisoners across the country, specifically focused on follow-up with prisoner strike support (particularly in FL.)

They day after the mailing party, we could word that censorship of the initial #FightToxicPrisons mailing in support of the Sept 9 #PrisonStrike was overturned! At the ADX Supermax in Colorado no less. Read the letter here. This was the second success we have over turning censorship, with the other bring Rochester FMC (both federal facilities). Unfortunately, prisons in FL, PA, VA and TX censored our mail and either upheld the decision on appeal or chose to blow us off.

If anyone is interested in developing this mailing effort into a regular effort, perhaps a quarterly or bi-annual FTP newsletter, please get in touch and lets make it happen in the New Year!

Next, check out this audio from our Fight Toxic Prison Convergence in June, Jasmine Heiss from Amnesty International USA and the International Leonard Peltier Defense Committee lays out the injustices that Leonard has faced. Check the comments on the video for how you can help the effort to secure clemency for him. (Side note: Check out the article “From Pipelines to Prisons” about the connections between the prison strike and the native led anti-pipeline resistance in Lakota territory.)

We are now gearing up for another FTP Convergence in June again, likely in Texas. And between now and then, we plan to release additional audio from last year’s gathering.

We also recently learned that the EPA opted to release their EJ 2020 plan without inclusion of input on recognizing prisoner populations, which we had been pushing simultaneous to the Letcher campaign. Here’s the comment that was submitted earlier this year to the EPA on the topic.

Lastly, the Letcher County federal prison proposal… Is once again stalled. the Bureau of Prisons has announced in the local paper that they will be going back through a draft EIS process. This could easily drag it out for another year… Or leave it dead in the mud. Thanks to all you who stepped up to #FightToxicPrisons. Stay tuned for the next steps to defeat this prison once and for all.
Below are copies of text from two articles in the local Letcher paper, The Mountain Eagle.

The Federal Bureau of Prisons will revise its environmental impact statement issued in March 2016 for the construction of a federal prison at Roxana.

In an effort to reduce the potential impact of the construction, the bureau is removing two parcels of the land from the area being considered for purchase, reducing the overall size of the prison campus to 570 acres from approximately 700 acres. The change in the size of the property will require a change in the layout and construction of the prison, and will require the revised environmental impact statement.

The new study will consider two alternatives: the Roxana site, and a “no action taken” alternative.

Once that new draft statement is completed, the bureau will hold another public hearing in Letcher County, and make the revised draft available for public viewing for 45 days. The bureau will then respond to comments received during that process, issue a final supplemental statement and allow for another 30- day public review before any work begins.

The new draft has not yet been completed, and a date for the hearing has not been set. Anyone with questions can contact Isaac Gaston, Site Selection Specialist, U.S. Department of Justice, Federal Bureau of Prisons, 320 First Street NW, Washington, D.C., 20534, or email him at igaston@bop.gov.

Water, sewer board working to get funds for prison projects

Applications have been submitted to the Division for Abandoned Mine Lands (AML) and the Appalachian Regional Commission (ARC) for funding the water lines and sewage treatment facility to serve the proposed federal prison at Roxana.

Bell Engineering official Alan Bowman told the board of directors of the Letcher County Water and Sewer District that the construction can’t begin until after the U.S. Bureau of Prisons goes through another environmental review process for prison construction. Bowman said the process might be completed by spring. Bell Engineering will continue to keep open communications with the bureau and will begin the preliminary engineering reports for both projects, he said.