The dangers of turning police officers into revenue generators. 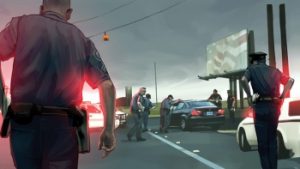 In April, several days after North Charleston, South Carolina, police officer Michael Slager stopped Walter Scott for a busted taillight and then fatally shot him, the usual cable-news transmogrification of victim into superpredator ran into problems. The dash cam showed Scott being pulled over while traveling at a nerdy rate of speed, using his left turn signal to pull into a parking lot and having an amiable conversation with Slager until he realized he’d probably get popped for nonpayment of child support. At which point he bolted out of the car and hobbled off. Slager then shot him. Why didn’t the cop just jog up and grab him? Calling what the obese 50-year-old Scott was doing “running” really stretches the bounds of literary license.

But maybe the question to ask is: Why did Scott run? The answer came when the New York Times revealed Scott to be a man of modest means trapped in an exhausting hamster wheel: He would get a low-paying job, make some child support payments, fall behind on them, get fined, miss a payment, get jailed for a few weeks, lose that job due to absence, and then start over at a lower-paying job. From all apparent evidence, he was a decent schlub trying to make things work in a system engineered to make his life miserable and recast his best efforts as criminal behavior.

Recently, two more deaths of African Americans that have blown up in the media follow a pattern similar to Scott’s. Sandra Bland in Texas and Samuel DuBose in Cincinnati were each stopped for minor traffic infractions (failing to use turn signal, missing front license plate), followed by immediate escalation by the officer into rage, and then an official story that is obviously contradicted by the video (that the officer tried to “de-escalate” the tension with Bland; that the officer was dragged by DuBose’s car). In both cases, the perpetrator of a minor traffic offense died.

When incidents of police violence come to light, the usual defense is that we should not tarnish all the good cops just because of “a few bad apples.” No one can argue with that. But what is usually implied in that phrase is that the “bad” officers’ intentions are malevolent—that they are morally corrupt and racist. And that may be true, but they are also bad in the job-performance sense. These men are crummy cops, sometimes profoundly so. Slager had a record for gratuitously using his Taser. Timothy Leohmann, who leapt from his car and instantly killed 12-year-old Tamir Rice, had been deemed “weepy” and unable to “emotionally function” by a supervisor at his previous PD job, who added: “I do not believe time, nor training, will be able to change or correct these deficiencies.” Ferguson’s Darren Wilson was also fired from his previous job—actually, the entire police force of Jennings, Missouri, was disbanded for being awful….