The mission of the Texas Inmate Families Association is to break the cycle of incarceration in Texas by strengthening families through organizing, support, education, and advocacy.
JOIN THE CAMPAIGN

Individuals in Texas Prisons Fasting in Solidarity with Rally Participants

The Texas Families for Justice Rally in Austin, Texas clearly won’t be just any rally. This is the beginning of a strong movement in Texas, where the voices of those most impacted by the criminal justice system will be heard loud and clear. 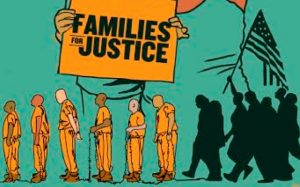 I’m wearing a shirt with my son’s picture so they know that he is a person, not a number. – Mary, rally participant

Individuals incarcerated at a Texas facility have communicated that they will be fasting on Friday in solidarity with family members impacted by incarceration who have organized a rally on the state capitol steps. For now, the details are being held back, but families have heard that as many as 200 incarcerated people have planned the act in solidarity with the Texas Families for Justice rally.

They are showing their support for impacted family members, who, over the past six months, have been organizing people across the state to speak out. In an effort to build a unified grassroots base to push back on the impact mass incarceration has on communities, a coalition of family groups has been working together to raise funds for shirts and bus rentals, hold late night sign-making sessions, and facilitate dozens of outreach meetings and conference calls across the state.

Many of the participants will be wearing shirts with photos of their loved ones on the day of the rally. They want people to see their loved ones as people, and not numbers. The families have come up with a chant, one they’ll be practicing on the bus ride in:

What’s this Rally All About

To Let You Know that Families Count!!

We’ve Got The Power When we Unite!!

Don’t throw away the key

Don’t throw away our families

Not another nickel, not another dime, mass incarceration is a crime!

The rally, which will include a legislative “boot camp,” marks the beginning of a larger organizing effort by impacted families and formerly incarcerated individuals to build grassroots power in Texas.

The individuals fasting in prison know the sacrifice it takes for families to make it to the rally.  The question isn’t whether you’ll come to the rally and stand with them, but how many people you’ll bring along with you.