Campaign for Prison Phone Justice Briefing
Put into simple terms, up to 60% of the costs of calls from prison has nothing to do with the cost of the phone service provided. So when Mary talks to her husband 40% percent of the cost is for the service and 60% is a kickback to the state government.

Here’s how it works:
The vast majority of states receive kickbacks from phone companies, which result in higher phone rates.These excessive rates further distance prisoners from their families, who can ill afford high phone bills. While most prisoners are from urban areas, virtually all prisons built in the last 30 years have been built in rural areas far from where most prisoners have family or community ties. The nation is disadvantaged when prisoners are unable to maintain family ties that will help them succeed post-release. There is a widely-known and researched correlation between prisoners who maintain contact with their families and those who are successful in staying out of prison after they are released.

Most states profit handsomely from prison phone kickbacks, to the tune of over $152 million a year nationwide.Monopolies are only prohibited in the non-prison market. Prison phone service providers are free to bid on contracts at the maximum rates allowed and upon winning are effectively granted a monopoly.The irrationality of the rate structures is exemplified by Rhode Island’s no-kickback commission low rates, which are provided by Global Tel*Link (GTL) – the same firm that has some of the highest rates in other states where the company pays commissions. The higher rates charged in states where GTL pays commissions amount to nothing more than price gouging and gross profiteering.

For prisoners who are functionally illiterate or suffer from mental disorders and cannot rely on written correspondence, phone calls are the primary means of maintaining family ties and parental relationships during their incarceration.  Children who cannot write or read are presented another barrier to their relationship through the high-cost of prison phone calls. This is also true for prisoners whose families cannot travel to distant prisons for in-person visitation.

Are all states the same? The short answer is “no.”
Eight states have banned prison phone kickbacks entirely: Nebraska, New Mexico, New York, Rhode Island, Michigan, South Carolina, California (as of 2011) and Missouri (Missouri requires its phone service provider to cover the cost of 21 staff positions to monitor prisoners’ calls). New Hampshire, Kansas and Arkansas have reduced their kickback commissions, and Montana recently entered into a limited-commission contract. As a result, prison phone rates in those states have plummeted.

The Way Forward
Campaign for Prison Phone Justice supports federal oversight of and rate caps on interstate prison phone services, as well as closer regulation and lower rate caps on the state level. Most significantly, the contracts should be bid on the basis of who can provide the lowest price to the consumer, the direct opposite of what occurs now.

The American Correctional Association, American Bar Association and National Association of Women Judges have voiced support for reforming prison phone rates, and a number of advocacy organizations are involved in this issue – including National CURE, state CURE chapters and the eTc Campaign, the Center for Constitutional Rights, and the Brennan Center for Justice.

The consensus reached by these groups is that to ensure prisoners maintain their family relationships so they have a lesser chance of re-offending after they are released, and to reduce the unfair financial burden placed on prisoners’ families, exorbitant prison phone rates must cease. If prison systems in states ranging from California and New York to Nebraska and South Carolina can reduce their phone rates by forgoing commissions, then there is no reason – except callous greed – why other states cannot do likewise. 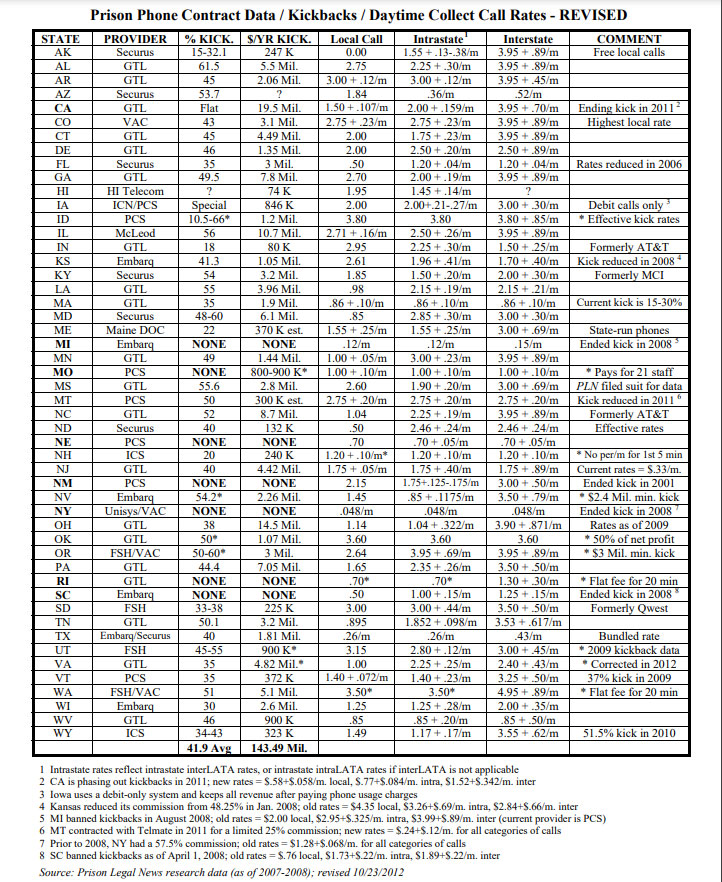