Together, we are building the infrastructure to engage thousands of people in a campaign to stop $2 billion of prison construction, and re-direct those funds into creating good jobs for people in low-income, high-crime neighborhoods.

Jobs Not Jails
Tweets by @jobsnotjails
I’m standing with displaced families from Puerto Rico and @pvpspringfield as they call on @FEMA to activate the Distwitter.com/i/web/status/1…aYsP
Thank You all for your tireless work given toward the passage of this bill - mailchi.mp/epocainc/thank…
mailchi.mp/epocainc/nov-1…
JOIN THE CAMPAIGN

In the afternoon of January 31, 2015, Jobs Not Jails gathered in Freedom House in Roxbury to create a vision statement, get a legislative update on their Justice Reinvestment bill and talk with We Are The Ones, which is a group that has emerged out of the recent Black Lives Matter movement. 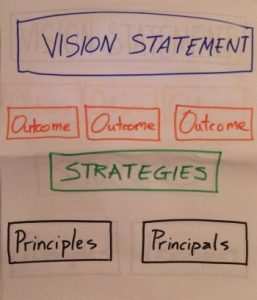 Meeting began with some recap and context setting — maybe a 1/3 or more said this was their first meeting.

A vision statement is: a (desired end-state) a short (preferably one sentence statement) describing the clear and inspirational long term desired change, resulting from the work.

Groups then worked independently on tweaking or rewording the draft. We put those up, did a gallery walk and members voted on the best draft. We then spent some more time tweaking that draft which resulted in the following vision statement:

We then reviewed the following outcomes to determine if accomplishing these will progress the movement towards the vision.

Generally everyone was receptive to these with some suggestions and wordsmithing. We spent some time discussing how we would measure or develop indicators for each. A noted comment was that 1-3 read like outcomes and 4-6 seemed more like strategies. There was some discussion about combining 4. and 6.  or 5. and 6.

– Include Mass Incarceration ended as an outcome
– Speak to structural and system shifts somewhere
– Public consensus…Hearts and minds attitude of care towards ex-offenders
– Other themes to possibly weave in – equality, humanity, recognition of brotherhood and sisterhood

Goal of next meeting is to spend a few minutes quickly reviewing and finalizing vision and outcomes, then spend bulk of time working through strategies (power shifts), and values/principles to complete the Common agenda framework.

Individuals from We Are the Ones also joined us to talk about the recent decentralized Black Lives Matter movement. Their name refers to not being able to wait for “our Martin nor our Malcolm,” but recognizing that they are the ones they have been waiting for. We once again want to thank them for their time and continued energy.

Legislative update: 57 co-sponsors signed onto our Justice Reinvestment bill. Senators can continue to sign on as co-sponsors until the bill reaches the Senate floor. Also Suffolk County Sheriff Tompkins signed on!