Arkansas DOC says water is safe, but didn’t test it from prisoners’ taps 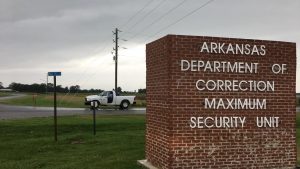 In July of this year, former prisoners and their family members raised concerns about a variety of prison issues at a hearing with state lawmakers. This included repeated concerns with water quality at multiple facilities. One former prisoner stated that water in the East Arkansas Unit was not even “fit to take a shower in.”

It should always be a red flag for potential water quality problems when a prison’s water system is using 300,000 gallons over its capacity. But Arkansas’s Department of Corrections preferred to dodge a thorough investigation rather than face a possible crisis.

Prisoners had been complaining of brown, dirty water at four Arkansas prisons known as, Tucker, East Arkansas, Cummins and North Central Units, and their nearby satellite camps, which all use a common water systems. Collectively these prisons house around half the state’s prisoner population of 15,630.

According to reports, the Tucker Unit, a prison which captured news headlines just last year when prisoners took over the facility and held guards hostage, has a daily maximum demand of more than 890,000 gallons, but the system’s daily capacity is only 590,000 gallons of water a day.

Water quality experts stated the discoloration was likely due to high levels of iron and manganese, according to reports they reviewed from the State Health Department.

Following a public records request by the Arkansas Democrat-Gazette, the Health Department released inspection reports confirming concerns about levels of iron in the raw well water at the East Arkansas Unit, and iron and manganese at the Tucker Unit.

The state’s Health Department report reviewed samples taken in May and June of this year, finding iron levels at the Tucker water treatment plant as high as 2.25 milligrams per liter, which is well over the federally established maximum limit of 0.3 milligram per liter. Measurements of manganese ranged from 0.015 to 0.04 milligram per liter, above the 0.01 milligram federal limit.

The limits for iron and manganese set by the U.S. Environmental Protection Agency are part of “secondary maximum contaminant levels,” which are not enforceable by the federal agency. The EPA says on its website that violations of its secondary standards may cause people to stop drinking the water due to smell or taste, though the water may still be safe to drink.

Along with the high level of iron and manganese at the Tucker Unit water system, inspectors noted “sand in the raw well water.”

However, one researcher who analyzed the Arkansas Health Department’s inspections raised concerns that the reports were not an accurate assessment of the water quality problems facing prisoners because of how few samples came from prisoners’ actual taps, where old and corroded pipes may contain significantly higher levels of contamination.

Though not appearing to be a major facility of concern, the North Central Unit, located near Calico Rock, Arkansas, was the only location where samples were identified as coming from the actual buildings holding prisoners.