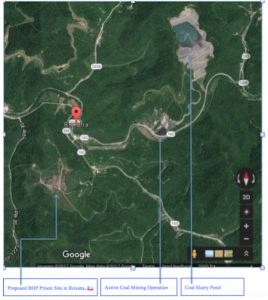 After more than three years of a controversial environmental review process for the proposed USP Letcher, conducted by the Bureau of Prisons and their consulting firm Cardno, lawyers filed a lawsuit in November 2018 on behalf of 21 federal prisoners spread across the country. Plaintiffs in the case say they were not properly informed about the $444 million dollar plans to construct a new federal prison on top of a former coal mine in Roxana, Kentucky, next to an active mine and coal sludge pond, which could house them in the near future if constructed. The Abolitionist Law Center (ALC), an organization that advocates for prisoners’ rights, is also listed as a plaintiff.

The complete court filing can be found here.

The lawsuit states that federal prisoners should have been considered as parties with legally-required access to documents, as required by the National Environmental Policy Act (NEPA). The Environmental Impact Statement (EIS) process outlines a wide range of social and environmental impacts, including potential health risks and alternatives to construction, which prisoners are uniquely situated to provide insight on. They are also particularly vulnerable to the results stemming from the final EIS approval which occurred in March 2018.

The prisoners are asking the courts to halt progress on the plan until they have properly received access to documents for review and comment in accordance with the Administrative Procedure Act and NEPA.

Among the concerns raised by plaintiffs include the BOP failing to show an adequate assessment of alternatives, including an accurate indication of an actual need for the project. The complaint notes the bureau completed its alternative analysis for the Letcher facility in 2005, a period during which it operated 102 facilities with a capacity of 106,732, but confined 145,780. The bureau has built at least 20 new prisons since 2005, increasing its capacity by 28,559, while the population has declined by more than 30,000 since its peak in 2013.

Prisoners note that the bureau could renovate existing low-security facilities in the Mid-Atlantic region to house high-security prisoners. But instead of considering these factors, the lawsuit argues that bureau confined the scope of its NEPA analysis to “actions and alternatives that would promote the construction of a new” penitentiary.

The 56-page complaint also labels the site a public health risks, stating that mining activity impacts those living near MTR sites, even if mining has stopped. “Several peer review articles have indicated that 1) people living near mountaintop mining have cancer rates of 14.4% compared to 9.4% for people elsewhere in Appalachia; 2) the rate of children born with birth defects was 42% higher in areas near mountaintop removal mining; and 3) the public health costs of pollution from coal operations in Appalachia amount to a staggering $75 billion a year.”

And lastly, the complaint indicates concern for the surrounding ecosystem, stating “Development of the project would permanently degrade the already vulnerable environment… clear-cutting over 120 acres of forest habitat for endangered bat species, excavating and grading an additional 59 acres, destroying three acres of wetlands, building an entirely new wastewater utility in the region, and emitting thousands of pounds of additional greenhouse gas emissions.”

While this is not the first time NEPA has been used to challenge prison construction, or that prisoners have attempted to engage in the public comment period, it may be the first time this sort of litigation has been led by prisoner plaintiffs asserting their right to be recognized as impacted parties in the environmental review process.

One prisoner listed on the lawsuit, Manuel Gauna, stated: “I believe that construction of this particular prison is neglecting the people in Letcher and the people in the prison system. We as prisoners should have had the opportunity to participate in this public comment period for this project. Correctional officers are overworked at my facility [FCI Mendota]. I wish that the BOP would spend the money that it wants to use to build a new prison to properly staff this prison.”

Another prisoner named in the suit, Mark Jordan, currently at USP Tucson, explained, “Just last week President Trump publicly announced his support for the First Step Act, a reform bill aimed at reducing the federal prison population. The Letcher County project flies directly in the face of this reform narrative.”

Jordan continues, “Despite serious environmental and health hazards, the Justice Department solicited public comment from everyone except those most directly impacted by the project, the prisoners themselves. Health and safety issues aside, this is but a needless pork barrel project ushered through by Kentucky Representative Hal Rogers at a time when public opinion and policy-makers are trying to reduce the population of the federal prison system, not build more prisons merely for the sake of building more prisons.”

Prisoners aren’t the only ones concerned about the facility. Letcher County resident Elvenia Blair, who lives close the proposed prison, has been contesting the prison for several years.

She states, “Eastern Kentucky has the highest cancer rate in the nation. Forcing prisoners, correctional officers and their families to live, work and visit this environment is discrimination.”

Blair is also a board member of Friends of the Lilley Cornett Woods and North Fork Watershed, one of multiple local organizations which have expressed concerns about the impact of prison construction.

She continues, “With coal mining on its way out, the natural history of our mountains and wildlife is what we have left to attract people to the area. That will be disturbed with barbed wire, shooting ranges, heavy traffic flow of transporting prisoners. We won’t see economic growth from this.”

National groups have also been critical of the environmental effects threatened by the prison. In an interview with Courthouse News, Tom Sexton with the Sierra Club of eastern Kentucky said it was “a travesty” to build a “half-million dollar monument to human misery” next to the rare, old-growth Lilley Cornett Woods.

Nearby in Martin County, the Big Sandy federal prison also sits on a former mountaintop mine site. Sexton noted that Big Sandy’s tilting guard towers and partially sunken buildings have earned it the nickname “Sink-Sink” among locals.

“[P]eople are forced to live on these sites and we don’t know anything about the legacy costs.” Sexton continued, “Is it really humane to subject people to that?”

Emily Posner, Attorney for the Campaign to Fight Toxic Prisons, also notes, “Federal legislation indicates a downward trend in prison population. My clients are in agreement with local residents who feel that there are much better ways to generate federal support in Appalachian communities than wasting hundreds of millions on an unnecessary prison.”