REPRINT/REPOST:
Virginia is guaranteed to face an escalating crisis if it does not take steps to reassess and change its approach to crime and imprisonment, according to a new policy brief released today by the Justice Policy Institute (JPI). The policy brief, Virginia‚Äôs Justice System: Expensive, Ineffective and Unfair, calls the Commonwealth‚Äôs juvenile and criminal justice policies and practices ineffective, inequitable and expensive, costing taxpayers billions each year. 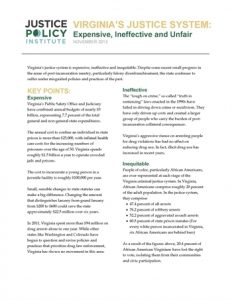 WASHINGTON, D.C. ‚Äì Virginia is guaranteed to face an escalating crisis if it does not take steps to reassess and change its approach to crime and imprisonment, according to a new policy brief released today by the Justice Policy Institute (JPI). The policy brief, Virginia‚Äôs Justice System:¬Ý Expensive, Ineffective and Unfair, calls the Commonwealth‚Äôs juvenile and criminal justice policies and practices ineffective, inequitable and expensive, costing taxpayers billions each year. During a time when other jurisdictions are moving towards reducing their reliance on the criminal justice system to solve public health and drug addiction challenges, the policy brief finds that the justice system in Virginia is:

Ineffective: The ‚Äútruth in sentencing‚Äù laws enacted in the 1990s have failed to impact crime or recidivism, and Virginia‚Äôs aggressive stance on arresting people for drug violations has had no effect on reducing drug use, which has increased in recent years;
Expensive: In 2011, Virginia spent more than $94 million on drug arrests alone;
Unfair: Whites and African Americans use and sell drugs at similar rates. But in Virginia, while African Americans are about 20 percent of the population, they make up 44 percent of those incarcerated on a drug offense.

With the 8th highest jail incarceration rate in the U.S., 1 of every 214 adult Virginians is behind bars in county jails across the state; African-American youth over-represented in the juvenile justice system; and the Commonwealth‚Äôs overreliance on incarceration ‚Äì largely as a result of arresting Virginians for drug offenses ‚Äì Virginia has an over-burdened correctional system unable to consistently provide services or safety. JPI‚Äôs policy brief also points to reforms that, if implemented, would result in relief for Virginians directly impacted by the justice system and taxpayers alike.

The policy brief is an overview of the Commonwealth‚Äôs adult and youth justice system, which identifies areas of progress ‚Äì like the recent effort to re-enfranchise formerly incarcerated residents with voting rights and other civil rights ‚Äì and also identifies solutions to revise ineffective policies and practices of the past that remain in place.

The policy brief‚Äôs findings will be presented tomorrow at Virginia Union University during a panel discussion on Virginia‚Äôs justice system, featuring Dr. Lisa Moon of the VUU Center for the Urban Child; Gus Smith, Richmond resident and parent of Kemba Smith whose mandatory minimum sentence was commuted by President Clinton in 2000; Greg Carpenter, re-entry advocate for Jericho Ministries in MD; Marc Schindler, Executive Director of JPI; and Spike Bradford, Senior Research Associate at JPI and author of the new brief.

Virginia‚Äôs Justice System: Expensive, Ineffective and Unfair is the first in a series of policy briefs being released by JPI as a group of justice advocates and concerned stakeholders have been meeting in the Commonwealth to discuss pushing for reforms. The policy brief found that Virginia’s jail and prison systems have grown substantially from the 1990s to the present day, eating up scarce resources that could be invested more effectively to create safe and productive communities. The state pays roughly $1.5 billion a year on its jails and prisons, a substantial part of which is devoted to locking up people who commit non-violent and drug offenses, who now make up over two-thirds of Virginia’s prison and jail populations.

‚ÄúThis doesn‚Äôt reflect our priorities or good policy. By reducing the number of people behind bars who have committed non-violent offenses, Virginia could free up millions of tax dollars which it could use to hire new teachers and create new crime prevention programs,‚Äù said Marc Schindler, Executive Director of JPI. ‚ÄúBy reducing the number of people in jail and prison, Virginia can invest in real priorities that will strengthen its families and communities.‚Äù

Like across the nation, despite the decrease in crime over the last two decades, the number of arrests in Virginia has remained relatively stable, decreasing only 1.1 percent. This can be attributed to a greater number of arrests for drug violations, which have increased 52 percent in the last decade. ‚ÄúIt‚Äôs time for a justice system overhaul,‚Äù said the Rev. Emory Berry, Jr., Senior Pastor of Fourth Baptist Church and Board Chairman of the Virginia Alliance Against Mass Incarceration. ‚ÄúThe findings in this brief are unfortunately not surprising considering what my congregants tell me about their loved ones. This brief tells us it is time to reform this so-called justice system and move toward redemption. It‚Äôs time for Virginia citizens and policymakers to take a fresh look at the challenges created by decades of over-punishment and the associated costs.‚Äù

Recommendations in Virginia‚Äô Justice System: Expensive, Ineffective and Unfair include:

The Justice Policy Institute, based in Washington, D.C., is working to reduce the use of incarceration and the justice system and promote policies that improve the well-being of all people and communities. For more JPI briefs on the criminal justice system, please visit our website at www.justicepolicy.org.