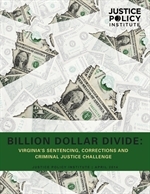 WASHINGTON, D.C. ‚Äì As Virginia lawmakers consider a budget that would see corrections spending surpass a billion dollars in general funds, a new report points to racial disparities, skewed fiscal priorities, and missed opportunities for improvements through proposed legislation, and calls for reforms to the commonwealth‚Äôs sentencing, corrections and criminal justice system.

According to Billion Dollar Divide Virginia‚Äôs Sentencing, Corrections and Criminal Justice Challenge, a new report released today by the Justice Policy Institute (JPI), while other states are successfully reforming their sentencing laws, parole policies and drug laws, Virginia is lagging behind and spending significant funds that could be used more effectively to benefit public safety in the commonwealth. The report‚Äôs findings will be unveiled as part of a panel discussion and town hall Thursday from 5 to 7 p.m. at the Richmond Police Academy located at Virginia Union University featuring representatives from JPI, the Virginia Alliance Against Mass Incarceration, the Virginian Indigent Defense Commission, and Virginia CURE.

Put another way, in 2010 for every dollar the Commonwealth of Virginia spent on community supervision, it spent approximately $13 on costs for those incarcerated. Other states have a better balance between prison spending, and supporting individuals in the community.

“Taxpayers’ wallets ‚Äì and more important, people’s lives ‚Äì are in jeopardy,” said Marc Schindler, executive director of JPI. “Instead of planning to spend more than $1 billion on an ineffective corrections system, Virginia should be looking to policies that are being implemented successfully in other states to make wiser use of precious resources and get better public safety outcomes.‚Äù

According to Billion Dollar Divide, the second in a series of JPI reports analyzing Virginia‚Äôs criminal justice priorities, policymakers are holding on to policies that see too many Virginia residents locked up, while failing to enact reforms this year that would cut costs, create mechanisms to safely and smartly reduce the prison population, and begin to address other public safety and human services challenges.

Worrisome racial and ethnic disparities in how the state deals with drugs and drug crimes: African Americans make up approximately 20 percent of the Virginia population, but comprise 60 percent of the prison population, and 72 percent of all people incarcerated for a drug arrest. JPI has compiled information for the largest Virginia cities and counties that show the disparities in drug enforcement, and the latest data show Virginia‚Äôs drug arrest rates on the rise;
More people serving longer sentences and rising length-of-stay: The changes to Truth-in-Sentencing enacted in the 1990s eliminated parole, and reduced access to earned-time and good-time credits. The commonwealth has added more mandatory minimums that have lengthened prison terms, and about one quarter of all of Virginia‚Äôs mandatory minimum sentences involve drug offenses. Between 1992 and 2007, there has been a 72 percent increase in individuals serving time for drug offenses. There has also been a substantial and very expensive increase in the number of elderly individuals incarcerated in Virginia, despite strong evidence that these individuals pose little threat to public safety;
Challenges facing people impacted by the system getting a job, going to school, and integrating into their community: While Virginia has taken some positive steps by focusing more on having people successfully return to the community after having been incarcerated, there are more than 400,000 people with a felony conviction that places certain restrictions on where they might live, where they might work, their ability to get into school, and access support and opportunities that would reduce the likelihood of committing additional crimes.

‚ÄúVirginia’s criminal justice system sends more people to prison, incarcerates people longer and releases less people from prison than most other states,‚Äù said Lillie Branch-Kennedy, executive director for the Virginia-based Resource Information Help for the Disadvantaged. ‚ÄúEven more so, our African-American population is disproportionally impacted and affected by the lack of reforms, draconian state drug policies and unfair sentencing. People should be outraged and change is needed now.‚Äù

Billion Dollar Divide asks the question, ‚Äúwith the commonwealth once again about to cross the divide of spending a billion general fund dollars on corrections, and with 2013 being the first year of a documented increase in the prison population in five years, shouldn‚Äôt alarm bells be ringing in Richmond around the current state of sentencing, corrections spending and criminal justice policy?‚Äù

What is happening, instead? In 2014, Virginia lawmakers failed to move forward on the following initiatives:

Eligibility for the Temporary Assistance for Needy Families for individuals with drug related felonies. HB 1068, legislation that would have allowed people with a drug or drug related felony who are currently denied TANF solely because of their conviction to be eligible to receive these benefits, failed to move forward.

‚ÄúSeveral legislative bills failed this session that would have saved Virginia millions of dollars and allowed residents a second chance sooner,‚Äù said Jason Ziedenberg, JPI‚Äôs research and policy director and a co-author of the report. ‚ÄúVirginia lawmakers are watching history pass them by when they fail to enact the kind of sentencing reforms seen in other states, and are simply passing along costs to taxpayers with little benefit to public safety.‚Äù

The Justice Policy Institute, based in Washington, D.C., is working to reduce the use of incarceration and the justice system and promote policies that improve the well-being of all people and communities. For more JPI briefs on the criminal justice system, visit www.justicepolicy.org.