Prisoners inside the Elmore and Escambia prisons, directly across from the new 4,000 bed “mega-prison” sites, resist construction alongside local nature enthusiasts 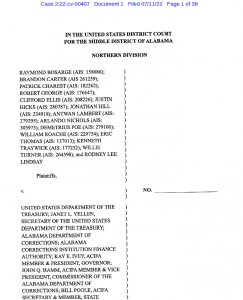 A lawsuit was filed in the Middle District of Alabama Monday afternoon, July 11, 2022, on behalf of prisoners inside the Elmore and Escambia prisons directly across from the new 4,000 bed “mega-prison” sites, as well as a local resident of Wetumpka, Alabama, who is a nature enthusiast. The lawsuit alleges that the State of Alabama and hired construction companies did not follow federal environmental regulations before beginning construction on the two 4000-bed facilities, and that the US Treasury failed to enforce the necessary environmental approval process. Because the State of Alabama is using $400 million in federal American Rescue Plan (ARPA) funds, these facilities should be subject to the National Environmental Policy Act (NEPA), which should require large-scale projects such as this to go through an environmental impact assessment prior to beginning construction.
Federal NEPA requirements have proven to be major roadblocks in new prison construction in the recent past, as evidenced by the 4-year long NEPA-triggered Environmental Impact Assessment process that prevented any construction in what was supposed to become USP Letcher, a planned Federal 1,500 bed maximum security prison in Eastern Kentucky. Largely due to the nature of stringent NEPA requirements aimed at protecting people, land, water and at-risk species, the project was deemed too burdensome by the Federal Bureau of Prisons and canceled in 2019.