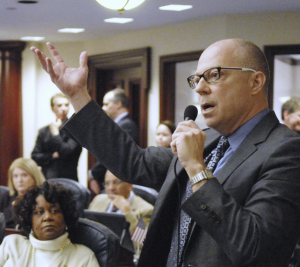 One way prisons cause catastrophic harm is by adversely impacting the health of the incarcerated and their families, forcing an already economically burdened population to sink deeper into poverty and isolation. A state representative in Florida deserves plaudits for trying to help.

Representative David Richardson has been taking on a privately run women’s prison in his district of Gadsden County, Florida—for failing to protect the well-being of its inmates. It’s a problem we’re familiar with here at Nation Inside, where we’ve been championing “Stop the Heat” campaigns that challenge the dangerously high temperatures found in uncooled prison cells during summer.

The facility is Gadsden Correctional. It’s owned by the Management Training Corporation, and  is the state’s largest privately run prison. According to the Miami Herald, when Richardson decided to inspect it, he was taken aback.

“Among the conditions Richardson observed during two surprise visits this month: 55-degree temperatures in inmate cells; no hot water; care being withheld from ill inmates; a tooth extraction without sedation; an inmate who contracted pneumonia after being housed in a unit with no heat or hot water; and reports that guards who impregnated inmates were allowed to remain on the job.”

Though U.S. politics are a mess, right now, ending mass incarceration enjoys wide, bipartisan support. One reason is that more and more impacted individuals have realized they’re not alone, that they’re a large constituency that needs to speak out.

“Richardson said that when he told the Herald/Times about the harsh and unsafe conditions at Gadsden Correctional in February, he knew he would get feedback. But he didn’t expect the avalanche of emails and phone calls from families — and even former officers employed by the private prison operator.”