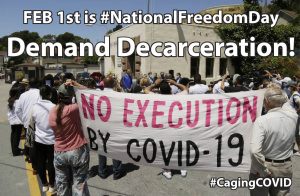 THE ORIGINAL SOURCE FOR FAQ CAN BE FOUND HERE. CHECK FOR UPDATES.

Where is this FAQ coming from?

Why focus on the DOJ?

What does the Office of the Inspector General do?

Can people also file complaints directly with the OIG?

What does the Civil Rights Divisions do?

Who is the head of the DOJ?

How do I file a civil rights complaint for someone in an Immigrant Detention Center?

What if someone is in a military prison?

What about Civil Commitment Centers?

The following is a working document created by participants in the #CagingCOVID campaign and aimed at developing a complete understanding of what the DOJ can do to address COVID-19 in prisons and jails, and what they cannot do. We have initiated the document as a starting point for understanding the DOJ, and more specifically, as a tool in deepening the conversation in a public, virtual stakeholders meeting which we have requested to occur on Feb 1st, Freedom Day (at the time of initial publication of this FAQ, the date and time for this meeting is being considered but has not been confirmed by DOJ staff).

The document is set so that anyone reading can leave comments and questions. Please make use of this so that we are able to develop a more thorough and useful document.

Where is this FAQ coming from?

In the summer of 2019 Nation Inside’s #CagingCOVID campaign went on a search for political pressure points to build towards effectively addressing this pandemic’s disproportionate impact on incarcerated people, alongside the litany of abuse that existed pre-pandemic that set a stage for this public health crisis. This resulted in identifying the Department of Justice (DOJ) as a central agency in addressing this in a broad and multifaceted way that had the sharpest teeth and a record of similar action to what we were advocating for.

Why focus on the DOJ?

The DOJ has two distinct agencies operating within it which could directly investigate the widespread failures to uphold health and safety standards in most every prison and jail in the country.

These two DOJ agencies are (1) Office of the Inspector General and (2) Civil Rights Division. While they are technically under a single federal umbrella, they operate independently and claim to have no overlapping jurisdiction. Still there is a single figure at the head of the DOJ which does have a greater say in the staffing, allocation of funds, and ability to make recommendations across other important and powerful political bodies.

What does the Office of the Inspector General do?

The Office of the Inspector General (OIG) oversees the activity of the various federal agencies operating under the DOJ umbrella. This includes the Bureau of Prisons (BOP), as well as all other federal entities it touches, such as private contract prisons and halfway houses. In this way, it has oversight on the single largest prisoner population under one agency and its investigations and enforcement actions can have a massive impact on the lives of approximately 200,000 people. Over the past year of COVID-19, the OIG’s Pandemic Response Oversight effort has conducted several reports on specific facilities as well as examine the “use of home confinement and other early release authorities provided under the CARES Act to manage the spread of COVID-19 within BOP facilities.”

The head of this office is Michael Horowitz. Being that it is considered an agency focused on internal oversight and not policy related issues, it is not expected to experience much turnover under a new Presidential administration.

Can people also file complaints directly with the OIG?

Yes, there is an online form to make complaints that can result in investigations and possible enforcement actions in federal prison-related facilities.

What does the Civil Rights Divisions do?

The DOJ’s Civil Rights Division exists to enforce federal laws that protect people from discrimination or loss of other constitutional rights. In particular the Special Litigation Section, works to protect civil rights in the following areas: 1) the rights of people in state or local institutions, including: jails, prisons, juvenile detention facilities, and health care facilities for persons with disabilities; 2) the rights of individuals with disabilities to receive services in their communities, rather than in institutions; 3) the rights of people who interact with state or local police or sheriffs’ departments; and 4) the rights of youth involved in the juvenile justice system. This means they can initiate legal action against essentially any local jail or prison.

For example, at the moment, they have major investigation/enforcement actions pending a against a county jail in New Jersey for inadequate mental health services, a state prison in Florida for rampant sexual abuse, and the entire state prison system of Alabama for failing to protect prisoners from state violence.

In fact, this agency is specifically tasked with enforcing adequate health care for prisoners as required by the U.S. Constitution under the “Civil Rights of Institutionalized Persons Act” (CRIPA).

While there has not been explicit cases around COVID-19 exposure in prisons and jails yet, there is a very clear precedent in an investigation surrounding the virus in state-run nursing homes

In an August 26 DOJ statement on CRIPA action related to public nursing homes, Assistant Attorney General for Civil Rights Division stated that “Protecting the rights of some of society’s most vulnerable members…is one of our country’s most important obligations.”

The head of this division at the moment is John B. Daukas, who recently replaced Eric Dreiband as Acting Assistant Attorney General. But the Biden / Harris Administration as now nominated Kristen Clarke of the Lawyers Committee for Civil Rights. She will start in this official capacity once she is confirmed by the Senate.

Yes, there is also an online form to make complaints to the Civil Rights Division that can result in investigations and possible enforcement actions in federal prison-related facilities.

Who is the head of the DOJ?

President Biden has chosen Judge Merrick Garland as his nominee for attorney general, as the new administration begins to take form.

Garland’s nomination comes nearly five years after President Barack Obama unsuccessfully nominated him to the Supreme Court. While Garland never received a hearing for the high court position, he will face a hearing before the Senate Judiciary Committee in consideration of his nomination for the attorney general position.

How do I file a civil rights complaint for someone in an Immigrant Detention Center?

The Department of Homeland Security (DHS) Office for Civil Rights and Civil Liberties (CRCL) reviews and investigates civil rights and civil liberties complaints made by the public regarding U.S. DHS policies and activities. Under 6 U.S.C. § 345 and 42 U.S.C. § 2000ee-1, CRCL reviews and assesses allegations involving a range of alleged civil rights and civil liberties abuses as well as human rights matters. Find the online form to make complaints here.

What if someone is in a military prison?

Individuals concerned about conditions in military prisons can file complaints to the Department of Defense IG office here.

What about Civil Commitment Centers?

The same forms above apply, depending on whether it is a state or federal facility. Learn more about the problems with Civil Commitment Centers for sex offenders here.