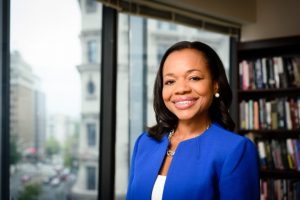 Washington D.C. — Prisoner rights activists and abolitionists representing 70+ organizations across the country will be traveling to DC to hand-deliver a petition on Monday, Feb 1st, National Freedom Day, to the incoming head of the Department of Justice (DOJ) Civil Rights Division, Kristen Clarke [pictured above].

The group will gather at 1pm in front of the U.S. Department of Justice building, 600 E St NW, Washington, DC, and travel to Clarke’s current office at the Lawyers Committee for Civil Rights from there.

[Details, including audio and video testimony available for media use, can be found in the storybank here. Many of the family members featured in this storybank are also available for interviews. Contact Nation Inside.]

After 11 months of pandemic conditions and an infection rate that impacted prisoners on average five times higher than those outside the walls, the Civil Rights Division has yet to bring a related enforcement case forward. This single agency has the mandate to oversee the protection of civil and constitutional rights for about 90% of the prisoner population in the country.

Reports updated as of Jan. 19, show at least 355,957 prisoners have gotten the virus, and more than 2,232 died as a result of it. This does not account for permanent debilitation, unnecessary suffering and trauma experienced by prisoners and their family members, all of which is outside the scope of even the most extreme criminal sentences.

Single states such as Florida and Texas accounting for 382 of those total deaths. The Civil Rights Division has the resources to challenge these state agencies in federal court, and could include recommendations for urgent “decarceration” measures that would most effectively address a public health emergency such as this.

Additionally, the pandemic has resulted in prisons and jails abusing isolation more than ever before. While social distance is necessary, solitary confinement is a form of torture that cannot be an acceptable longterm option for maintaining health and safety during a pandemic.

In many cases, pre-trial prisoners are still being held, either exposed to the virus or in solitary confinement, simply because they cannot afford bail. There are also hundreds of thousands of post-conviction prisoners who could reasonably be released under an expedited process for parole, clemency and compassionate release.

The #CagingCOVID campaign says it has identified the DOJ Civil Rights Divisions as the strongest vehicle for upholding federal protection from cruel and unusual punishment in state and county facilities at the scale required by the pandemic.

“Inaction is no longer acceptable. We are calling on soon-to-be Assistant Attorney General Clarke to apply her background in advocacy for the human rights of incarcerated people to quell this crisis,” said #CagingCOVID organizer Panagioti Tsolkas. “Bold enforcement action from the Civil Rights Division could drive the political will to address the incarceration crisis that has been 150 years in the making.”

A 1949 U.S. Presidential Proclamation created National Freedom Day to commemorate both the passage of the 13th Amendment on that day 84 years before and the signing of the Universal Declaration of Human Rights approved by the General Assembly of the United Nations a year prior, with “wholehearted support” from the U.S., which declares that “recognition of the inherent dignity and of the equal and inalienable rights of all members of the human family is the foundation of freedom, justice and peace in the world.”

Local demonstrations are also occurring in other areas around the country. Nation Inside can also provide details on some of these events.