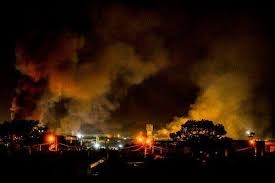 Update of the conditions of living for inmates at Ware State Prison as of Monday, August 10, 2020.

We are now receiving one hot meal for dinner. The food is awful because they are letting the inmates from M building prepare the meals. These inmates are not cooks, they work outside detail. We are receiving spoiled bologna and peanut butter for breakfast and lunch. The bologna is brown and smells horrible. I have only ate the bread because I know that meat will make me sick. We are complaining about the meat but they keep giving it to us. No one is eating it. It’s either just eat the bread the meat has not touched or starve.

We still have not had store. We have not been allowed to communicate with our family thru emails, phone or mail. We don’t have stamps and the warden said we ain’t getting any. No one will take the out going mail for the guys who still had a stamp or two in there possession. The officer passed out in coming mail to us for the first time on Saturday night.

We have had 2 showers in 10 days last week on Tuesday and Friday. We have not had a shower this week yet. We are still locked in our rooms with no officer on post.

Last week on Friday night a inmate became sick. We had to flash our lights in the rooms and hollar out the windows to get the attention of the perimeter car in order to get him medical attention. We have not heard from him since. His property is still in his room but we don’t know if he died or what.

No one should be put in a position of constant fear of losing their life because of failure to get help for medical or fire emergenciess. They have us locked in these rooms and they slide a bolt on the door then put a lock on the bolt. It takes the officers 30 minutes to go from door to door and slide the bolt and put a lock on it. How are they gone get everyone out of here if it takes 30 minutes to open all the doors? And we have not been given but one cup of ice on basically a dayly basis forcing us to drink this brown water out of the sink. Call the Ware County Health Department and tell them we are being denied showers, hot meals and clean drinking water.

Call the Georgia Department of Correction and let them know the same and we are in constant danger from the under staffing, threatened dayly and locked in these cells unsupervised for hours at a time. Call the news stations that reported the riots and let them know we are being mistreated. We are begging for help before we perish