Family Grieves Loss of Father to Covid-19 in Florida Prison 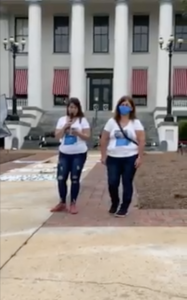 VIDEO/TRANSCRIPT: Chrystal Camacho, daughter of Henry Camacho who passed away after contracting coronavirus in Sumter Correctional Institution in Florida, gives a speech at a public funeral held at the state capitol in Tallahassee to honor all the incarcerated lives lost to Covid-19 in Florida prisons and detention centers.

Henry Camacho: a son, a brother, an uncle, and most importantly a father!

The DOC had no interest in knowing any of that. They looked at him as an inmate serving a life sentence, someone who had no value and no worth. My father was the youngest male inmate to die from Covid-19. His life was in the hands of the DOC and they let him die in cold blood. He first showed signs of the virus in the beginning of April and, as most inmates, he was scared to speak up because of the lack of communication and threats from the facility and staff as to what would happen with him.

When the facility finally realized he was ill, they found him on the floor of his cell in chills, [with a] high fever, severe shortness of breath, and unstable. Instead of rushing him to the hospital for medical attention, they had him sit in solitary confinement for three days. Once he was finally moved into medical, he was rushed to the hospital that night and immediately placed on a ventilator and remained on it for two weeks. Two days after being removed off the ventilator, he was sent back to a Covid-19 infested prison. He was unable to swallow as he failed the swallow test in the hospital. He could not move his extremities unassisted; he most certainly could not stand or walk, and he was still on oxygen.

Where in any ‘free-world’ situation does this happen?

His lungs showed no signs of improvement prior to leaving the hospital. The prison staff did not have any medical technology to be able to closely monitor his lungs or give him any additional treatments to help them improve. He was sent back with a prescription for steroids and Prilosec — no step-down care plan or additional treatments. He lasted roughly four days before passing away.

From the moment the prison staff removed him from his cell, to the day he passed, we fought blood, tooth, and nail to find out what was going on with him. Numerous emails and phone calls to the medical staff, the assistant Warden, the Warden, Mark Inch, and other state representatives all fell on deaf ears. There wasn’t a day that I didn’t make at least ten calls into the facility and the hospital to find out what was going on and to advocate for him. All of it fell on deaf ears. To this day no one can tell me what happened with my father the day he died and if they even tried to resesitate him. None of  this is okay, and no one should ever have to live through this unjust treatment.

My father was titled as a “Model Inmate” by the Warden himself. Little did they know his worth valued way more than that! The DOC gave my father a death sentence, one that was not warranted. He wasnt just a number, he was a life that mattered and held value beyond words. His death will not be in vain and I will not rest until justice and reform is done!“