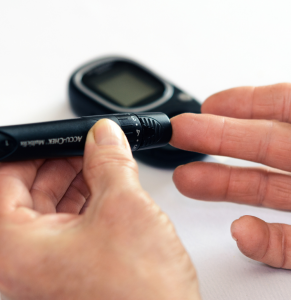 A mother talks about her diabetic son’s treatment at the Terrell Unit in Rosharon, Texas. He complained about insufficient medical care and lack of access to safe food, and he was retaliated against.

He has been retaliated against. The guards, you know, have kind of put a target on his back. You know, it’s against policy for the offenders to be retaliated against for whistle blowing, telling something that is going on that is not right.

So I’m not sure – I don’t remember exactly what month he contracted Covid. I think it was in May. They put him in a segregated cell. And my biggest concern was the Covid, of course. Because he has asthma, he has high blood pressure and thyroid disorder. And I was concerned about that. But I was also concerned because he’s diabetic. He can bottom out real easy.

I don’t know if you’re familiar with diabetics. They can pass out because they’re producing too much insulin. Then they get their shots. And if they don’t eat at a certain time, their blood sugar drops and then they lose consciousness. And it can be it can be deadly, and it can be, I mean, it can cause severe brain injury.

So he was having some issues with that, with them not taking him to get his blood sugar checked. His commissary was restricted because he was segregated. So he didn’t have a lot of extra food or anything in his cell, that if his blood sugar started dropping, that he could pop a candy or a peppermint or something to raise it up until he could get something to eat it.

Also, they were giving them Johnny lunches, which is a sack lunch, and he is allergic to peanut butter. This is all kind of circular. He’d get peanut butter, he wouldn’t eat it; he’s allergic to it. They wouldn’t give him something else. His blood sugar would drop. He would pass out. So that was just that was a cyclic event that was happening frequently. So I called to complain about that.

Well, then they moved them all into the gym. They moved all the Covid positives into the gym, and they were sleeping on the floor. They were still getting the sack lunches. He got in trouble a couple of times because the guards kept giving him the peanut butter. And I did get a little bit of comfort, even though he hated it, sort of knowing that other people were around him – that if he did pass out, they could alert someone to come help him. Then because he would make such a fuss over the peanut butter sandwiches, they started putting a target on him. Retaliating against him.

And one time, his blood sugar dropped. There was a scuffle. And the nurse said, he’s not acting right. When your blood sugar goes low, you don’t think. You don’t think straight. Your brain’s not functioning at a normal capacity. And his blood sugar was like in the sixties. I guess he says something. The guard got mad. They brought a case of threatening the guard to him, and now he’s stuck in seg again. They took his classes away. I mean, threatening a guard is a very serious offense. It can affect his parole. I mean, there’s all kinds of things that can happen. And he hasn’t had a major case in like 11 years. He’s been in there since 2000. But he didn’t, he couldn’t, go into detail with me about the threats because, you know, because everything’s monitored.