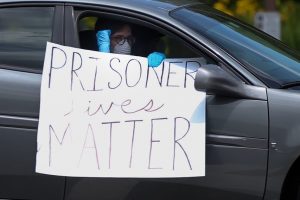 Testimony from an incarcerated person in Washington State Prison, Georgia

On July 3, 2020 I knew I was in trouble. I had been sick for a couple days and now had most of the known symptoms. My roommate had the same thing. I tried to fight it off because most people were beating it in 3 or 4 days. I spiraled out of control until Sunday the 12th and couldn’t take the pain anymore. I told my roommate that I was going to go to medical to get help.

When they called pill call Monday morning I went out with them to medical. The Lieutenant wouldn’t even let me in, but made me wait outside for about an hour before telling me I had to go back to the building and they would call me back at 1:30.  I told her that would not be a really good idea if I in fact had covid 19.  She told me firmly to “go back to your building, NOW!”  This was July 13th…….The nightmare began that afternoon and escalated throughout the night.

Went back to medical at 1:30 and sat out front about half an hour before being called to the back. Two doctors came in the room and talked to me. I told them what symptoms I had, some that are not publicized much or not in here anyway. After I finished they both got up and left the room. I remember thinking, Man, they must be going to call the morgue or maybe an ambulance.  When they came back they brought a surgical respirator, told me to put it on and not to take it off unless I was in my cell by myself.  One of them wrote me a prescription for 4 different drugs. Then I was taken to the hole and put in a cell by myself. I never received the medication that the doctors prescribed. Did it get turned down? Did a nurse take it home just in case they or their family might need it? I never did find out even after questioning one of them a month later.

The next 10 days were hell.

It was unbearably hot in the cell, I would say at least 100 degrees maybe 105 through the daytime.  The window has a shroud over the outside and the only thing visible is a little patch of sky, 1/2 inch, right at the top of the window. There is very little air flow coming in the window and when an officer leaves the front door to the cell house open the little air flow that the exhaust fan draws through the room stops. The rooms here only have maybe a 1 inch gap under the door for air to flow anyway. I made a chute to put on the inside of the window to direct what little air flow there was down to the floor, that’s where I was most of the time.

I couldn’t and didn’t eat for twelve days altogether, was only able to drink water,  ice cold water when I could get it.

I lost my sense of smell the same evening, but did not lose the sense of taste per say.  I could taste but I tried to eat every day and everything, even the stuff I liked the most tasted like CRAPPOLA.  Swallowing  even a miniscule amount of anything brought on puking episodes that would last for hours at a time.

That evening I began to cough up blood clots, and it continued for ten days.  Coughed and coughed and coughed around the clock, usually until I passed or blacked out.  I woke up 4~5 times a day laying in various places around the cell, usually face down, in a puddle of regurgitated water filled with spots of blood.  I beat on the door for hours at a time to no avail, screamed when I could.  I was so weak for a few of the worst days that I could not stand, but had to crawl around on the floor on all fours.  During that time if I could have made it to the top bunk I probably would have hung myself, that is how bad the pain was, and I could not even isolate where it was.  It was like it was coming from outside of me and affecting all of me at once,  very scary.  I knew, KNEW, I was dying and I knew, KNEW, NO ONE………..NO ONE ……….gave a flying crap either.

I began to hallucinate on day two, the 14th.  First I saw colored globes floating around the room, the kind you might see while you are tripping on LSD with the vapor trails behind them.  Like the cheap movies from the seventies.  When I was still able to get on the bunk I looked at the floor one time and it was completely covered with cockroaches. The entire cell floor was covered with them, thousands of them.  I stomped my foot on the floor to begin killing them and poof, they vanished. Another time the walls were covered with ants. Not just a line of ants, the walls were covered. Millions of them. But there wasn’t a single ant on the floor. Oh, another hallucination.

After that I learned to ignore the hallucinations.

I NEVER received chemicals to clean the room.

Since I didn’t have anything to clean the room with I just pushed whatever I vomited up out under the door. The outside of my door was a hotbed of COVID 19. The orderly that worked the hold eventually caught Covid.

I was coughing up so much blood, and most of my intake of water, that i stayed dehydrated all the time.  Waking up in a sweat soaked bed did not help with that either, or waking up face down in a puddle of dried puke and  blood.

I was tested for COVID on the 13th of July and was not told the results until the 30th ………….of August.

When I was beginning to have real difficulty breathing, I put a note out the door. It works like this when you are in the hole. You write a note on a piece of paper or whatever and slide it out the crack of the door about head high. It sticks out like a flag and the next officer that comes by gets it. I wrote on a manilla legal envelope ( 9.5 x 13 inches)  “My name is …… I have Covid 19. I am dying.  Is there anyone out there who can help me get to a doctor or to a hospital….PLEASE.”  Two days went by and the note was still sticking out the door. An officer finally got it and called the evening duty officer to come down. It was a lieutenant. He opened the metal flap over the door window and spoke to me a minute. He told me I was not sick enough to go to the hospital. I told him that if I died, I hope the man upstairs would allow me to come back and haunt him everyday for the rest of his life. He said, “fuck you” and slammed the door flap. Of course I said, “fuck you too.”  The officer logged all this in the log book.

One day the door flap was open and I could look out into the day room area. They started passing out ice. What they do is bring a cooler of ice around and fill up your cup, bowl, or both if you are lucky. The inmate that was filling the cups with ice had an ice scoop in his hand, but the first room he got to he just took the cup and scooped it into the ice to fill it. On to the next room, this one was a bowl and, yep, it went into the ice to be filled as well. Guaranteed that neither the cup, or the bowl, nor the rest of the cups and bowls in the other 46 rooms were sanitized on the outside or the inside for that matter.

After the talk with the lieutenant, I remember I was sitting on the floor across from the toilet with my back against the wall. I couldn’t get up. I was struggling to breathe. It’s hard to explain on paper, but imagine getting a little gulp of air like a fish does when it is out of the water, but having to get it through a ink pen tube. Gulp, gulp, gulp, so little air each time. About 3 hours later I woke up face down in a puddle of vomit water. I had literally blacked out from lack of oxygen and this wasn’t the first time, nor the last.

If I had passed out and fell on my back one time, I would have drowned on my own vomit. The reported cause of my death would have been drowning, not COVID!

On the 10th day back there, the 23rd of July, I woke in the morning and felt a lot better, and by the end of the day felt almost better except lungs and chest and throat were very sore and stayed that way for weeks.  I lost 22 pounds during those 10 days.

The 24th came and I felt even better, was able to get up and walk for about 10 minutes at a time. Stayed in the hole until August 12th before being let out.  The pain is the hardest thing to explain. I’ve been shot in the head with a handgun, almost had my hand cut off with a machete, and had several broken bones, but those pains were nothing compared to Covid.

During that time I also prayed to every God I knew the Name of to stop all this, especially the pain, or to take my life, either would be better then what I went through.  I feel so lucky to be alive, even in here…..the weight is still off and I feel better than I have in years because of that,  but…….I am haunted……every waking second…..that it may come back…..I’m sure I wouldn’t survive round two of that…..But, I KICKED ITS ASS THE FIRST TIME!!!!!!!!!

Well, it may have won 14 rounds but I went the distance and am still standing!