Reportback from on #NationalFreedomDay, Feb 1st 2021 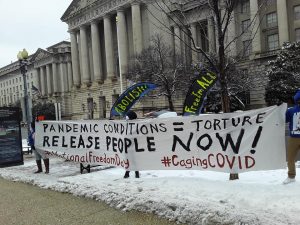 The following text, pictures, videos and links give a glimpse at activity surrounding the February 1st #NationalFreedomDay call to action associated with the #CagingCOVID campaign. This effort included the organizational endorsement of 77 organizations, ranging from larger national groups such as the Human Rights Defense Center and Greenpeace, to smaller, local grassroots groups spread across the country.

If you searched the hashtag #NationalFreedomDay in years past, you’d see a lot of politicians and organizations making historical references to the passing of the 13 Amendment mixed in with the occasional post from nonprofits talking about international human trafficking. In both cases there has been a glaring absence in recognizing the continuation of slavery, dehumanization and human rights abuses that exist in the U.S. prison system.

By organizing around February 1st this year, Nation Inside’s #CagingCOVID campaign sought to shift the dialogue to acknowledge the massive loophole in the 13th Amendment, which retained slavery for anyone convicted of an alleged crime, as well as the supposed commitment to a Universal Declaration of Human Rights that is referenced in the original 1949 Presidential proclamation.

While problems with the U.S. prison system go back far past the COVID-19 pandemic, this virus has exposed the stark reality of incarceration and the caste system it has fostered, where people held at gunpoint in state custody, disproportionately Black and brown, are 5 times more likely to be exposed to this virus than those who are not trapped behind bars.

With the urgency of this pandemic projected to continue for months to come, there is a need to escalate pressure on agency decisions that could amount to a massive reduction in the pandemic conditions that are equal to torture, medical neglect, and as of February 2nd reports, at least 2,357 COVID-related deaths which have occurred in state hands, many of which could have been preventable outside of a prison.

With that in mind, a small group of us drove into DC’s biggest snow storm in years, to hand-deliver a petition and letters with a message on the need for mass releases in prisons and jails due to pandemic conditions, namely medical neglect and excessive solitary confinement that amounts to torture in violation of civil rights and constitutional protections. 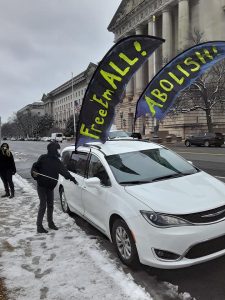 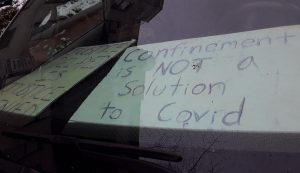 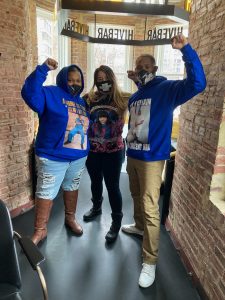 We were joined by family and support crew from prisoners that joined us, representing: John Jackson, Jairo Rodriquez and Corey Sutton in FDOC prisons, and Diamonds Ford in Duval County Jail.

We started the day with a “Virtual Stakeholder Meeting on DOJ’s Role in Protecting Prisoners During a Pandemic,” which included participation from over 30 former prisoners, advocates and representatives of organizations discussing strategies around pressuring the DOJ Civil Rights Division to use its resources to enforce pandemic safety standards in state prisons and county jails. Despite weeks of communication on this plan with agency representatives, providing ample notice to representatives of the DOJ and the Center for Disease Control (CDC), representatives of these government agencies explicitly opted not to participate.

(NOTE: As part of this planning process, our team created this FAQ on filing civil rights complaints with/for prisoners to the DOJ and other agencies.)

Then we brought our message directly to the Department of Justice, and more specifically to the incoming head of the DOJ Civil Rights Division, Assistance Attorney General nominee Kristen Clarke, currently of the Lawyers Committee on Civil Rights.

We knew that many government agency staff were working from home as a result of the pandemic (a particularly tragic irony in the case where people who oversee conditions in prisons and jails work in safety from home while incarcerated people are unable to practice social distance), but we expected to find at least a single staff person in the DOJ office able to receive the document. Instead we were refused entrance entirely into the building. This left us circling the building with signs, banners and sound system blaring until the local police arrived, given us certainty that our presence was indeed noticed.

Our next stop was Kristen Clarke’s office on K Street, at the Lawyers Committee on Civil Rights. This time we were at least greeted in the lobby by a receptionist, but once again refused entry and denied the ability to deliver the packet of petition and letters, so we did a little photo shoot out front of the office and tweeted it at Clarke. We also sent numerous emails and phone calls in hopes of establishing a direct line of communication with her (along with inviting her on the Virtual Stakeholders meeting that morning).

Ultimately, we decided to mail the packets we prepared, which included about 1,900 petitions, the list of 77 endorsing orgs and several personal letters from family members of prisoners, directly to the DOJ Civil Rights Division and the home office of Kristen Clarke. At the time of this reportback, we are still awaiting a response. 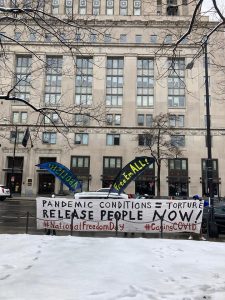 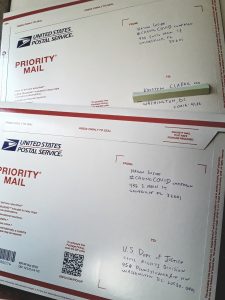 Finally, prior to leaving DC, our group enjoyed a snowball fight and did some site seeing at the national monuments, before being escorted off the Lincoln Memorial site by law enforcement. 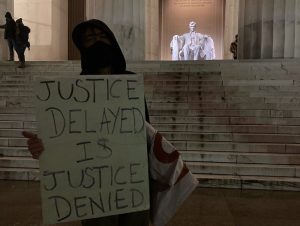 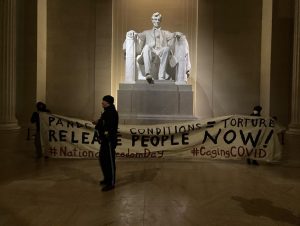 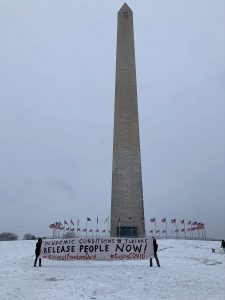 While we were not anticipating mass participation in the trip to DC, we had hoped for more participation. There were several factors limiting in-person involvement, including the pandemic, the threat of a fascist coup in DC and in state capitols across the country just weeks before, and some extreme weather conditions that weekend. But there is another factor that also needs to be reflected on, and it is summed up by a DC organizer who responded to an inquiry about collaboration on February 1st with the following message:

“Planning an action in DC without clearly grounding it in the experiences of people living in and incarcerated in/by DC is wrong. This city has one of the highest incarceration rates in the country… otherwise your action is part of a pattern where outside organizers treat this city as a protest playground and don’t see it as a place where many Black and brown people see it as their home, and not just a container for the nation’s fave buildings & departments.”

Reflecting on this is a significant piece of the take-away here. Though we planned the DOJ petition delivery on a short timeline, our attempt at coordination with people in DC and surrounding areas was still too-little-too-late. It should have occurred initially, prior to releasing a call to action. 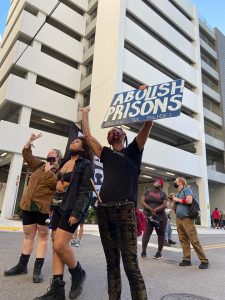 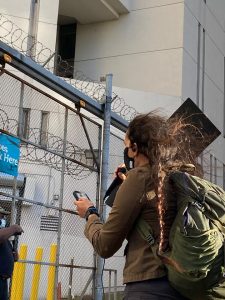 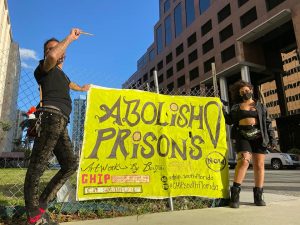 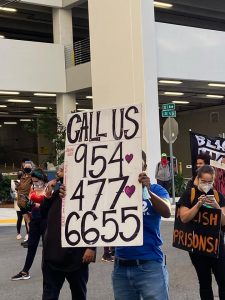 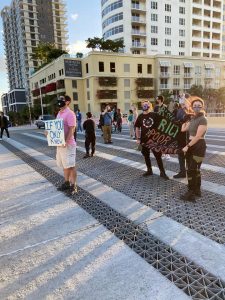 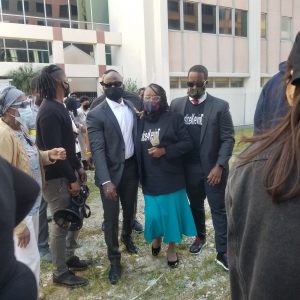 Family of Kevin Desir, speaking at a press conference on Feb 4th 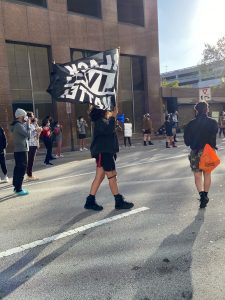 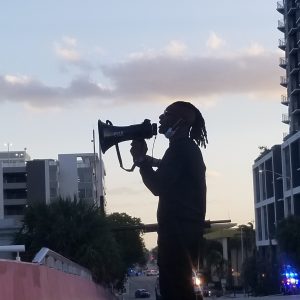 The event in Broward County stands out as a particularly powerful example of using #NationalFreedomDay to mobilize for local struggles. The event was sponsored by the Black Lives Matter Broward Alliance and the Decarcerate Coalition. About 50 people from various groups, including several that are also affiliated with the #CagingCOVID campaign, took the the streets in the Feb 1st “Free Broward” march, ending at the main County Jail building in a rally focused on COVID-19 in the regional jails as well as other instances of abuse, including the case of Kevin Desir, killed while in BSO custody (see family of Desir pictured above, and a short video about him below).

Officers who swore to protect and serve killed Kevin. He was a father, friend, son, and community member whose life was precious. Text “CHANGE954” to 954-833-6354 to find out how you can support our efforts to ensure that those who killed Kevin are held accountable. pic.twitter.com/WnC4mQ6XmE

In the build up to February 1st, #CagingCOVID released 20+ audio statements from prisoners and their family members for professional use in media stories, and we have more in the works. The goal of this is to amplify the direct experiences of those impacted by pandemic conditions, and we will continue to do that. You can find them all here.

The #CagingCOVID campaign coordinated a mass mailing to over 1,600 prisoners prior to February 1st. [The full content of that mailer can be found here.] Many reports of censorship in prison mail rooms are now coming in. So while we know some of our mail got in, we also know that the idea of #NationalFreedomDay being recognized in prisons appears to have struck fear into the hearts of prison administrations enough for them to violate the First Amendment and Due Process rights to keep their captives from knowing about it.

In the coming weeks, we intend to contest this censorship.

For our next focus, this campaign intends to direct strong support to a prisoner-led call to action for parole justice on April 3rd, which also happens to be the anniversary of the MLK speech to striking sanitation workers in Tennessee, the eve before he was assassinated.

“On April 3, 2021, the National Freedom Movement (NFM) will join the call for rallies and protests nationwide at Parole Boards, Departments of Corrections and State Houses. Governments are standing by as a humanitarian crisis and Covid-19 ravages US prisons claiming lives that can be saved by granting paroles.”

The full statement on April 3rd can be found here on the Free Alabama Movement website or the NFM Facebook page.